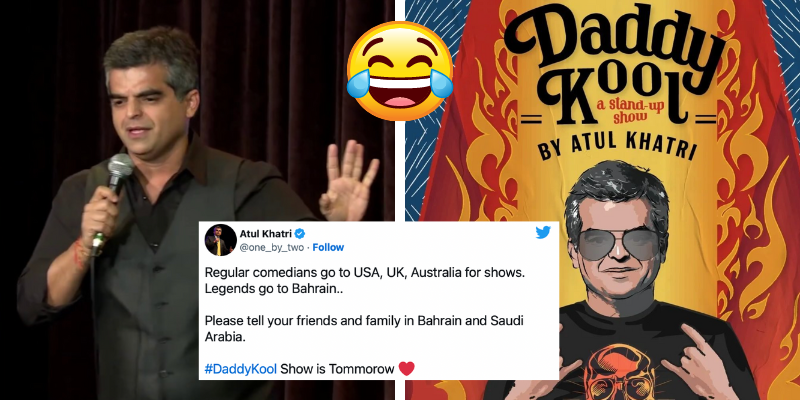 What better way to start the weekend than a night of relatable laughs with your squad. This is the chance to finally get the brady bunch together and head on over to a promising night of humor.

If you’re a fan of comedy nights, then get ready for a whole evening of laughter at Atul Khatri’s upcoming Bahrain show

Please tell your friends and family in Bahrain and Saudi Arabia.#DaddyKool Show is Tommorow ❤️ pic.twitter.com/vsO42vLi9F

The comedian posted the most iconic tweet to his millions of followers, announcing a comedy show tomorrow, at Ramee Grand Hotel & Spa. The highlight of the tweet was ‘Legends go to Bahrain…’ which is EVERYTHING. Atul will bring his comedy to life onstage his ‘Daddy Kool’ show, set to kick off at 6pm.

Atul is famous for his relatable political and cultural humor

The stand-up comedian and YouTube personality was rated among the top Indian comedians by CNN-IBN. Atul was also the only Indian to perform in the Hong Kong International Comedy Festival. He’s is also the winner of the CEO’s Got Talent Season 1. Get ready for a night full of laughter guys, and grab your tickets here if you haven’t already.