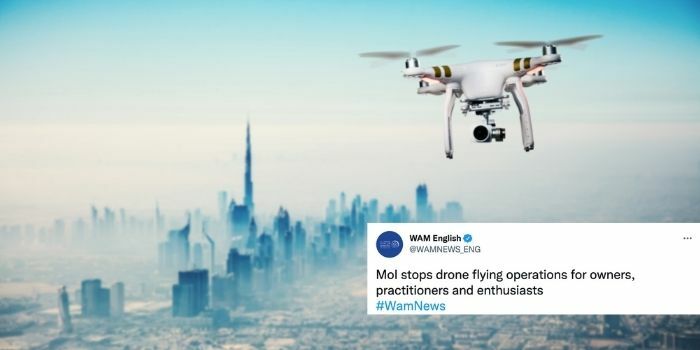 The Ministry of Interior (MoI) UAE, recently announced the use of “drones, including drones and light sports aircrafts” is being banned temporarily. They are stopping all flying operations for owners, practitioners and enthusiasts.

The Ministry announced on January 22, that this encompasses also air and sail spots, according to WAM. The new regulation has been put in place in coordination with the General Authority for Civil Aviation.

Flying drones and light aircrafts is now banned across the UAE

Those who have work contracts, or commercial or advertising projects that rely on filming using drones must communicate with the permit authorities to take a formal exemption. The permits will enable them to carry out their work during this period. Anyone who disregards the guidelines during this time period will be subject to legal liabilities.

The incident that took place in Abu Dhabi has been mentioned as misuse of drones.

The decision came after the misuse spotted recently, not limiting the practice of these sports to the areas identified in the user permits and trespassing into areas where these types of activities are prohibited.

The Ministry of Interiors is asking individuals and the community to respect this decision in order to ensure the safety of lives and property and to preserve them from unsafe practices.