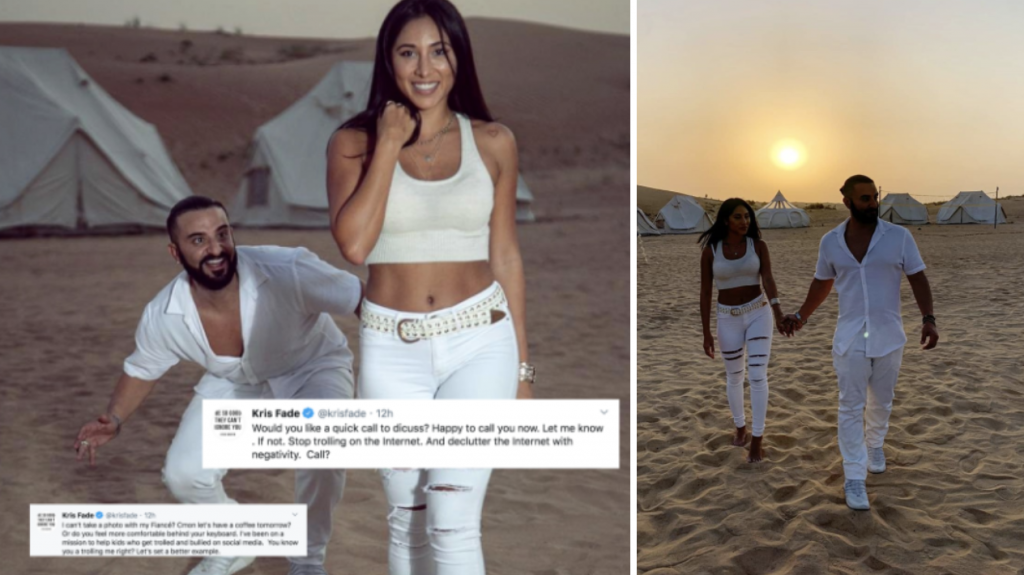 Last night, Twitter was divided after a resident took a photo from Kris Fade’s Facebook page which featured his fiance Brianna, and posted it to Twitter.

The accompanying comment read like this is not type of messaging we need to see in 2020, while other users jumped in to call out Kris’s post as “sexist” and “wrong” and referred to the #metoo movement.

Kris, host of The Kris Fade Show and public figure in the UAE with 194k IG followers, faces online negativity regularly, which he usually ignores, however when his family and values he feels strongly about were called into question, he said, “this is what I will not accept”.

“Attacking me, my identity as a person, as a father, as a fiance, calling me sexist, saying it’s a #metoo movement, I won’t accept that and nobody needs to”

Strong & important words by @krisfade on the @KrisFadeShow show this morning in response to social media trolling and bulling in the UAE. Needed to be said. @lovindubai pic.twitter.com/9t9cUjkdIq

Following accusations of sexism, Kris commented that online negativity is not acceptable and a debate followed over social media bullying and internet trolling

Brianna, Kris Fade’s fiance who features in the image asked the commentators to “focus your energy on something that matters”

Kris said he’d like to continue the debate offline, after he was accused of mansplaining

This morning, cyberbullying was the topic of the day on The Kris Fade Show. A representative for Cyber Safety UAE was joined to highlight the message to kids and parents that bullying attacks should never be accepted.

For any parents/students experiencing cyberbullying, you can call Cyber Safety UAE on 11611