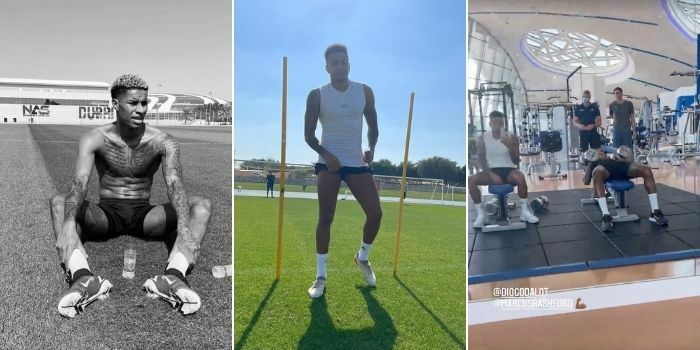 Tis the season… for footballers to train in Dubai!

Once again, Manchester United teammates Jesse Lingard, Marcus Rashford and Diogo Dalot has been spotted making the most of the UAE’s top training facilities.

The trio was training in NAS (Nad Al Sheba) Sports Complex, a Stadium, Arena & Sports Venue frequented by the who’s who of GOAT athletes including Cristiano Ronaldo and Novak Djokovic.

The majority of the Man U squad have been granted some time off this week, for the international break. Due to COVID, an overseas team camp wasn’t an option, but individually, players could travel freely.

Teamwork makes the dream work: The trip proves Dubai’s not just a party town, and many athletes drop in annually for warm-weather training

The group were snapped leaving the dreary UK with Harry Maguire

Marcus Rashfod captioned his first Dubai snaps ‘no days off’