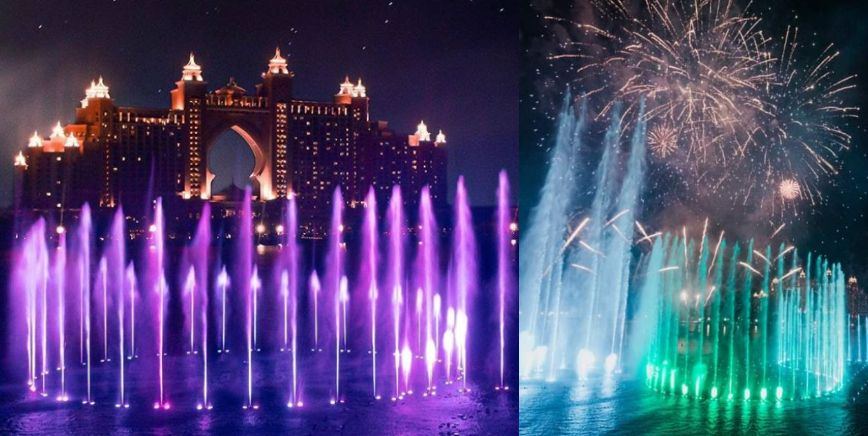 Dubai has broken yet another Guinness World Record – a record which was previously set by itself – World’s Largest Fountain.

Nakheel Malls recently SMASHED the record for world’s largest fountain, measuring at a whopping 7,327 square meters that span across the complete boulevard of The Pointe at Palm Jumeirah.

The record-breaking spectacle named The Palm Fountain was officially inaugurated on Thursday, October 22 at the Point Palm Jumeirah.

Climbing up the ranks as the World’s Largest Fountain, The Palm Fountain has left the Dubai Mall fountain resting at 2nd place for the title.

GWR is delighted to officially see The Palm Fountain breaking the title of the Largest fountain.

This fountain is an example of another milestone in Dubai’s architectural achievements and we are excited to declare it Officially Amazing™.

The Pointe's fountain at Palm Jumeirah in #Dubai officially confirmed as largest in the world.@GWR @ThePointePalm pic.twitter.com/L8afPkpNmg

The fountains blast up to 105 metres high and consist of more than 3,000 synchronized LED lights

The Nakheel Fountain at The Pointe Officially broke the Guinness world records for Largest Performing Fountain at 7,237 sqm pic.twitter.com/xTHX7meAim

The Palm Fountain (West Side) ⛲️
The largest fountain in the world 🌍 @GWR @HamdanMohammed
UAE, have it all. 🇦🇪 @ThePointePalm #thepalmfountain
Happiest birthday ever. pic.twitter.com/Yd86JRM0Mb

Dubai has achieved another world record of the world's largest fountain. We were live from The Pointe Fountain pic.twitter.com/BdyxUDeI2h

The launch event that began at 4pm on Thursday, saw multiple DJs, dance shows and a MASSIVE firework show

Fountains and fireworks to end the Half Term week! pic.twitter.com/2cvQ7bhDGO

The Palm Fountain is all set to enthral you year-round with spectacular shows daily from sunset to midnight!

Registrations for the full-day event can be made for FREE online.