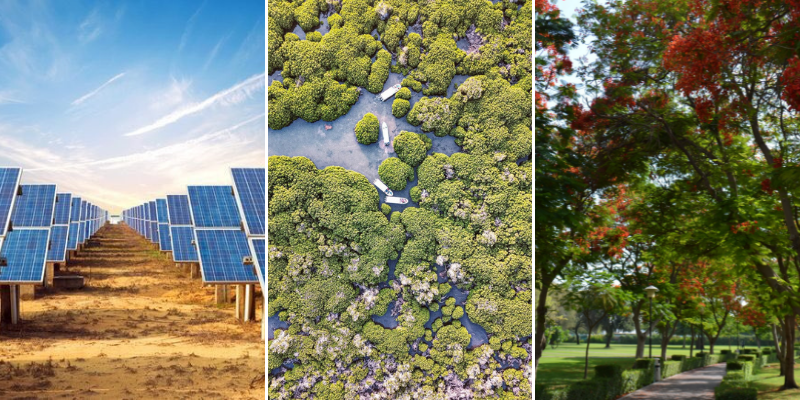 With the Saudi Green Initiative (SGI) Forum currently underway in Riyadh, we take a look at Saudi Arabia’s attempts to combat climate change.

Saudi Arabia is literally turning the desert green with this initiative rehabilitating some 40 million hectares in the process. They’ve already planted 10 million trees under the ‘Let’s Make it Green’ initiative across the country.

Al Ula is turning into one of the biggest tourist attractions and many developmental projects in the region are currently underway. Part of the Al Ula master plan is to create an area of 10 million m2 comprising green and open spaces.

The Farasan archipelago is home to some of the world’s most beautiful mangrove forests, which, along with other places where they may be found, are being restored. Over 4 million mangrove trees have been planted by oil giant Saudi Aramco.

This groundbreaking initiative can serve as a model for cities throughout the world in terms of incorporating much-needed green areas into densely populated metros. The Green Riyadh Project will include 541 square kilometers of green space, 7.5 million trees, and a 1,100-square-kilometer green belt that will run across the city.

The ambient temperature in Riyadh will be lowered by 2 degrees Celsius upon completion of the @RiyadhDevelop #GreenRiyadh project. In line with #SaudiGreenInitiative, the project will plant 7.5m trees to provide shade and facilitate a cooling process known as evapotranspiration. pic.twitter.com/VkAvOxtpG5

Many animals endemic to this part of the world have been successfully reintroduced into the wild through this project including the Arabian Gazelle and the Arabian Oryx. A rewilding project of the Arabian Leopard is also underway.

Mainly located on the Farasan Islands, the Arabian Oryx is a point of pride in the Gulf. An endangered species, Saudi Arabia has engaged in its preservation, reintroducing them to the wild. #SaudiArabia pic.twitter.com/I0Ddf5S2qt

This figure was earlier a mere 4% and a further 75 places have been recommended for protection, comprising 62 terrestrial and 13 coastal and marine reserves.

The beautiful canyon area of Sharaan has been designated a Nature Reserve by HRH Crown Prince Mohammed bin Salman, setting a new standard in the region for re-balancing fragile ecosystems and reflecting Saudi Arabia’s commitment to protecting our rich heritage. pic.twitter.com/TzDzemkANr

Currently planned wind and solar projects will provide enough energy to power 600,000 households, resulting in a 7-million-ton decrease in greenhouse gas emissions per year. The kingdom is also investing a whopping US$7 billion in low carbon solutions for the Oil and Gas Climate Initiative (OGCI) annually.