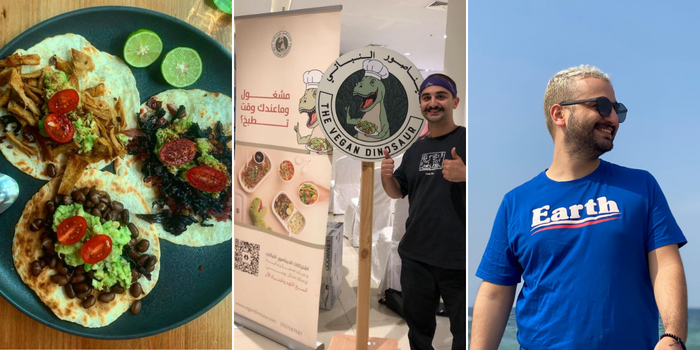 The vegan lifestyle has become a common choice worldwide, and can be quite challenging. This Jeddah-based chef however makes the most delicious selection of desserts, dishes, and drinks which makes going vegan look totally fun 😍

Meet Mansour Barri, the genius behind the cloud kitchen ‘The Vegan Dinosaur

Mansour has taken going vegan to a whole new level with his amazing restaurant known as the Vegan Dinosaur. His restaurant serves up the most delicious vegan meals, that have people flocking to try out 🔥

Who knew going vegan could look so colorful 😍

Mansour first started trying different veg-meals from all types of cultures like Asian, Italian, and others that inspired him to make his own. Thus comes, the Vegan Dinosaur!

Just LOOK at this food spread 🤩

If you’re in the mood for all things vegan, then you NEED try Mansour’s insta-worthy cloud kitchen 🙌

Meet the mastermind behind this sensational spot

Mansour first started vegetarianism after studying in Ireland. He suffered from a lot of stress and panic attacks, to which one of his friends suggested going vegan. Mansour first attempted going on a pescatarian (only seafood) diet, then shifted to only veggies, and is now officially fully vegan👏