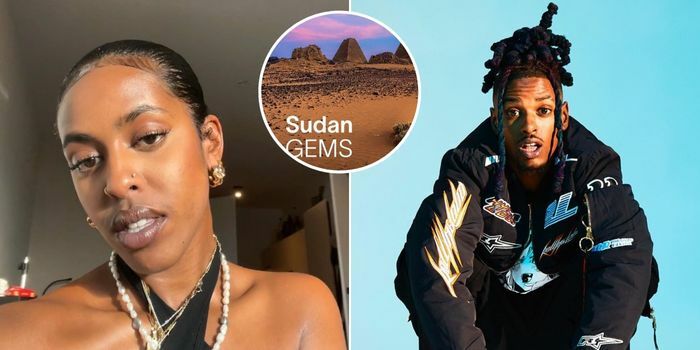 The rich and varied music of Khartoum is heavily influenced by Arabic, Western and other African influences, especially in the popular urban music scene in the city.

Having become a melting pot for people of diverse backgrounds, cultural heritages and tastes, there’s currently a variety of modern popular music that have become extremely popular over the years with local audiences, as well as Sudanese who are living abroad.

With a distinctive sound that can easily be spotted out in the crowds, here’s a round-up of our favourite artists from Khartoum.

Tamer Siddig, known professionally as roTation, is a Sudanese rapper, singer, songwriter and record producer. Proudly coming from Omdurman, roTation is one of the most eclectic rappers in Sudan that has gained popularity through tracks such as “Green” and “Randaka,” garnering over 1,000,000 plays on Spotify.

Mahdi Nourie, aka MaMan, is a singer, composer, producer, and rapper. Since the release of MaMan’s first solo song, “Grow Fast,” in 2018, and his debut album “Shammasi” in 2019, and “Alright” (feat. Too Dope)” which gained over 3 million views, Maman has established himself as one of the best emerging talents in Sudan.

Sudanese singer and rapper Nadine El Roubi has been storming the MENA region’s rap scene through freestyles, mixtapes and voice notes she wrote and recorded over the years. Elroubi released her first ever EP in October “Triplicity” providing a unique outlook on being an afro/Sudanese woman in the industry.

YK is a UK-based Sudanese rapper with an extremely unique laid-back flow. YK released his second album “Pressure” in 2020 carrying us through the pandemic, featuring our favourite artists; roTation, G-Salih and Too Dope. Yk is also known for his hits “Right Now”, “Gombula” and “Ballin” exceeding 1,000,000 plays on Spotify.

The Sudanese-Dutch singer and songwriter Gaidaa’s versatility has enabled her to establish a distinctive voice as a performer, blending R&B, hip-hop, and neo-soul with an impressive level of refinement. Gaidaa shared her captivating performance of ‘Morning Blue’ as part of the international A COLORS SHOW. Since then, she has released her incredible debut EP ‘Overture’, which features songs like “Stranger” and “Fall Higher”.

Miami-based Sudanese singer/songwriter Husham Yousif known as Hoosh has been making waves in the music industry with his unique take on R&B, Hip Hop, and Rap with hits with like “Kabsa”, “Better Days” and “Missed Takes” garnering over 3,000,000 plays on Spotify alone.

The Slam and Grand Slam crowned winner of NY, DC, Chicago and Dubai Jaysus Zain is definitely one of our favourites. With a unique blend of poetry, spoken word, and hip-hop, in his hit “Rage of The Pen” Jaysus Zain shows his ability to split himself into multiple characters with intricately raw and emotional expression like no other.

Ready to give them a listen?

Luckily enough for you, Anghami has recently put together a playlist featuring all our favourite artists, and many more talented individuals that come from Sudan. If you’re ready to give them a listen, make sure you check out the curated playlist and let us know your thoughts!

Enjoyed reading this? Discover more of our latest articles by visiting our homepage, or by giving us a follow on social media to be the first to hear about it!