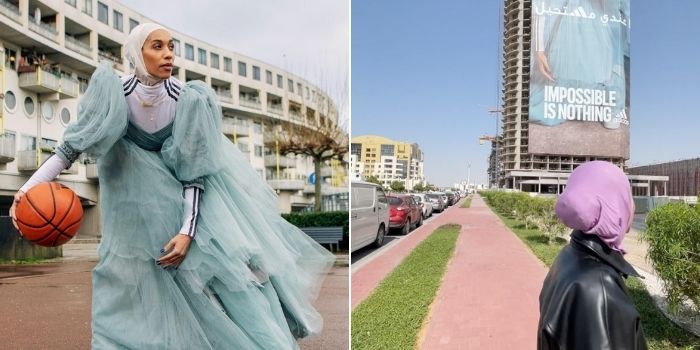 Sudanese-British sports activist, basket ball player, and poet Asma ElBadawi, shared an incredible moment witnessing her billboard with adidas for its ‘impossible is nothing’ campaign with a message to celebrate women and that their goals and dreams are possible.
In the Instagram post, shared on Friday, ElBadawi looked at her own billboard in Sheikh Zayed Road for the first time ever, adding that it was a surreal feeling.

Seeing her own billboard for the first time

We’ve all seen it: the incredible image of Asma a top a building in Sheikh Z, with a tulle gown and puffy sleeves combined with the sportswear brand’s athleisure line

She captioned the image, saying:

“Today I got to see the billboard of me in Dubai, it’s the biggest one of the many here and around the world 🌍 right now. It feels pretty surreal and the influx of support and love has been very humbling. So I’m going to enjoy this moment of chilling with the big boys. 😎😅

Breaking stereotypes isn’t a surprise for Elbadawi who has managed to mold the sports industry in so many ways, like overturning a ban on hijabs in professional basketball

In 2014, the basketball player and poet started the #FIBAAllowHijabcampaign to overturn the ban on hijabs in professional basketball. It petitioned the International Basketball Federation (FIBA) to allow both male and female players in religious headwear to compete professionally, according to Volunteerics.org

While in the UAE, Elbadawi enjoyed sightseeing and snapped a pic with the Museum of the Future too!

Have you seen her eye-catching image while driving yet?