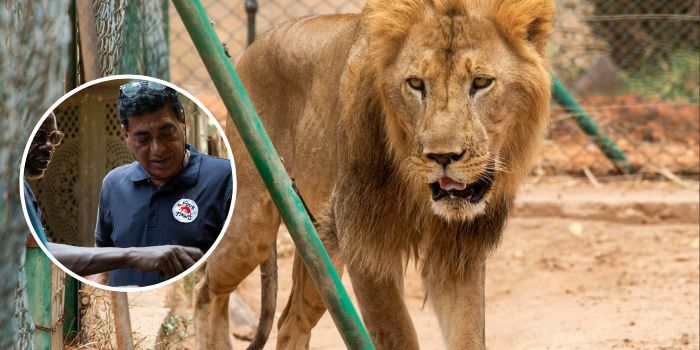 Remember the story of Kandaka and Mansour, the lions that were first saved by Dr Amir Khalil? Well, over the last two years, the lions have been nursed back to care by a wonderful team of specialists that have been keeping an eye on their nutrition and welfare.

#SaveSudanLions: Do you remember lions Kandaka & Mansour from Sudan? Two years ago, these big cats were rescued by Dr Amir Khalil and his team. Lioness Kandaka was on the brink of starvation when we arrived at the zoo, but with quick intervention, both lions were relocated. pic.twitter.com/Rab0zhiDor

Devastating pictures of the big cats caused global media storm, and with quick intervention, they were relocated to the newly built, Sudan Animal Rescue.

Despite the general health condition of Kandaka and Mansour since they were relocated to a stable home, it has been said that due to the prior long-term starvation, both of them suffered irreversible damage to their organs and would need specialised treatment.

Now, the lions are getting ready to be moved

After weeks of prepping them for their new homes, Dr Amir Khalil and his team are now preparing for the transfer of both the lions to Al Ma’wa for Nature and Wildlife in Jordan.

Our team has arrived in Sudan! After several weeks of preparation and logistical challenges, Dr. Amir Khalil & our team are on the ground in Khartoum. Over the next few days, they will prepare for the transfer of lions Kandaka & Mansour to our sanctuary in Jordan.#SaveSudanLions pic.twitter.com/bfSUvvYLez

Sad to see them go..

But we’re happy that Kandaka and Mansour will be getting all the medical attention that they need in order to live a happy life once again!

#SaveSudanLions is still an ongoing campaign where you can help these lions get the fresh start that they need.

Donate now to the cause by clicking here.

LATEST UPDATE: Kandaka & Mansour have arrived in their new home!

Our favourite big cats have now arrived in their new home Al Ma’awa for Nature and Wildlife in Amman, Jordan after being transferred from the Sudan Animal Rescue Park.

Accompanied by the teams of BOTH the parks in Khartoum & Amman, as well as with the help of the Princess Alia Foundation and FOUR PAWS International, both the lions have reached the new sanctuary and are now slowly settling in.

We’ve been following the lions since their journey at El Gurashi Zoo, and we’re super excited to see them getting ready to settle into their new home!