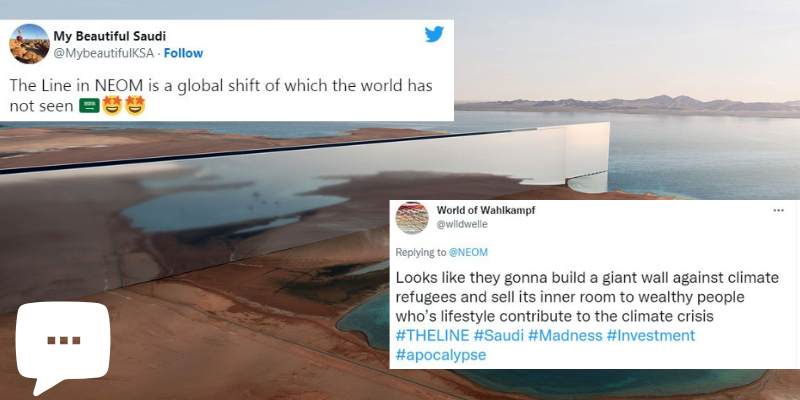 Part of the Vision 2030 projects, the Crown prince recently announced Neom’s vertical city known as ‘The Line.’ This city isn’t your normal concrete jungle of just buildings and villas, but is actually going to be vertical! The city will house different commercial, residential, and community buildings that will sit atop each other vertically. The lne will run on 100% renewable energy, and will preserve 95% of the area for nature. It aims to accomodate around 9 MILLION people and will extend to measure around 170 kilometers long.

It never ceases to amaze me just how insane Neom/The Line is. Absolutely mad stuff https://t.co/c9LxicunPn

How do animals get from one side of the line to the other. Birds will fly into the wall & kill themselves. The mirror must be coloured so it is visible to birds who will need to see it. What research has been done on insect life? I know it’s a desert but there is other life there

It’s an ambitious project…. two things spring to mind though.
1. The amount of material needed here is astronomical… where will it all come from?
2. A 170km long, 500m high mirrored wall will have a massive impact on wildlife, won’t it?#TheLine

However despite common skepticism, some still have faith this project will be an ultimate success and blow everyone’s mind once completed

The $500 billion Neom project in Saudi Arabia will be famous for yet another architectural masterpiece, a 121-kilometer scraper called The Mirror Line. pic.twitter.com/K0Lq5isrTG

The Line in NEOM is a global shift of which the world has not seen 🇸🇦🤩🤩 pic.twitter.com/ilgxaZKqIs

What do you think about this project?