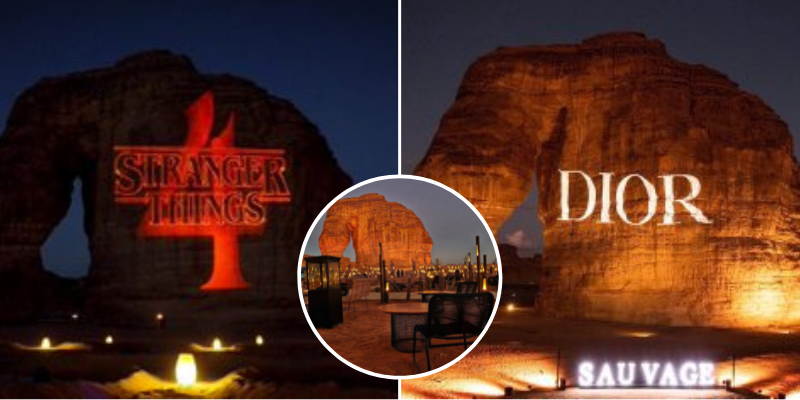 #AlUla’s landscapes are breathtaking, giving endless opportunities for that perfect photo on the drive to #Gharameel.
Tag someone you’d want to spend the weekend with here 👇

Madain Saleh, located in the area of AlUla is one of the most visited places in the Kingdom, and millions of tourists choose this site as the backdrop for their cool pictures. The Maraya concert hall, covered entirely in mirrors, is also one of the many reasons why AlUla has become an international sensation. Not to mention, the Elephant Rock is part of the region’s identity, as its natural elephant-like shape is what makes it a treat for the eyes, and totally worth the visit. However, the popularity of the region has lead AlUla to become much more than just a tourist destination. Thanks to the beautiful spots and worldwide recognition, AlUla has now succesfully become an advertisement hub for really big companies.

Big names like Cartier, Netflix and even Dior chose to light up Elephant Rock when advertising their products

Cartier announced their new bracelet, with a teaser of the Cartier panther arriving in AlUla.

The ads were shown on both Maraya and Elephant Rock.

Celebrating the release of the fourth season of #StrangerThings things on Mount Elephant in AlUla, #SaudiArabia. pic.twitter.com/1i9GBFs0I6

This phenomenon was trending on Twitter for the longest time, as the images looked super real!