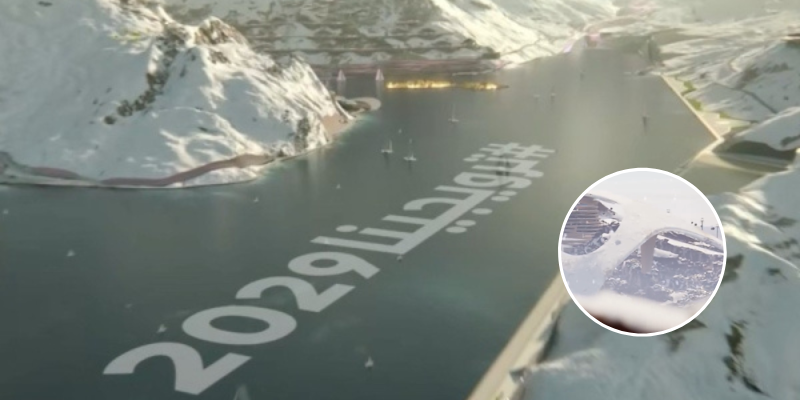 The deserts of Saudi Arabia are the last place that would come to mind as a winter games venue, but Trojena has landed the 2029 Asian Winter Games, and with good reason. We’ll tell you why.

The futuristic NEOM is divided into multiple zones, and one of these zones is Trojena, which is laid out in the mountains of NEOM. It promises to be a year-round destination, with different activities planned for different times of the year.

Come winter, and it will be a winter wonderland replete with winter sports.

It’s official… #TROJENA will host the 9th #AsianWinterGames in 2029.

From our world-class, cutting-edge mountain destination, we plan to put on the competition’s best event yet. Will you be attending?#TROJENA2029 #NEOM pic.twitter.com/NGydJxpNys

To begin with, the mountains in the country’s northwest experience significant temperature drops during the winter.

This place, in particular, sees temperatures drop below the zero degree mark. That’s due to the fact that Trojena soars at heights of between 1,500 m and 2,600 m, covering an area of nearly 60 square kilometres.

Videos from nearby areas often flood social media come winter, as the area has been witnessing sporadic bouts of snowfall lately. So natural snow is not out of the picture here.

Trojena itself is expected to be ready by 2026, with a further three years to go for the games to commence.
It will have two competitive clusters: an ice cluster for ice hockey, figure skating, and curling; and a snow cluster for alpine skiing, snowboarding, and slalom. This was all in the making well before the city landed the 2029 Asian Winter Games.

Ultra-luxury hotels and chalets are also under construction to house tourists that will visit the place.

With TROJENA winning the #AsianWinterGames 2029 bid, the CEO of #NEOM offers his thanks to the Custodian of the Two Holy Mosques and His Royal Highness the Crown Prince for their leadership and support 🏔#TROJENA2029 pic.twitter.com/z0bUYh3kVl

NEOM will also get a cutting-edge airport, with its ideal location making it accessible to 40% of the world’s population in two hours or less.Can you think of any better venue?

There’s a tonne of features that Trojena has that are too long to enumerate here, including the largest man-made freshwater lake on the peninsula and a village called ‘The Vault’ that will serve as an entryway into Trojena.

The kingdom has pulled off massive events at record speeds in the past. The Saudi Arabian GP is a good example of how, in just a matter of months, the whole venue was readied and hosted a grand spectacle for the world to see.

With the amount Saudi Arabia is ready to invest in Trojena, the 2029 edition could be the biggest in the games’ history.

P.S. It will be the first winter games in the Middle East.