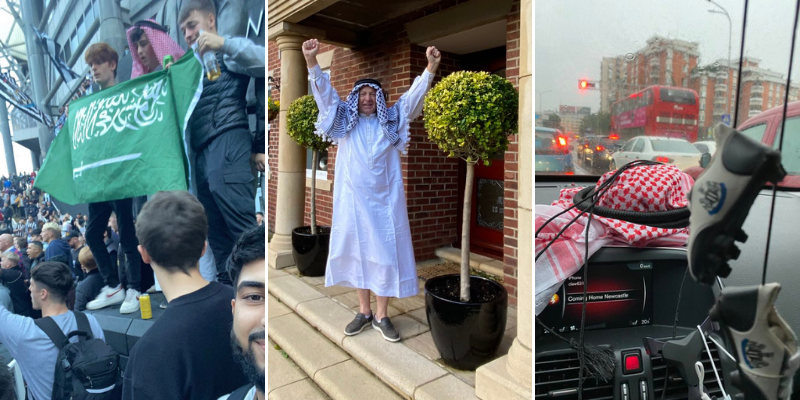 If you’ve seen the way the city of Newcastle has been celebrating Saudi’s PIF-led takeover, one thing’s for sure, our very own shimag has become rather popular. Fans have been flooding the internet with photos of them wearing it. Many are not getting it right though (that’s not how we wear it here), but with practice, they’ll get there.

Soon you would probably see that fans watching Newcastle’s matches in the stadium would be wearing the shimag.

Do they still have the shimag on Amazon UK?

I’ve been waiting to put this picture up for over a year 🤣🤣🤣 #NUFCTakeover pic.twitter.com/ltrcRdevIv

It isn’t just the shimag, many fans were seen carrying the Saudi flags with them.

This photo was from right after the announcement as fans gathered around Newcastle United’s home ground to celebrate.

You’re not the only ones, we in Saudi are also celebrating.

Message to the best fans on the planet – Enjoy your day. This is your time now. Our footballing lives and our city transforms today & here’s to a great welcome to 50,000,000 new black & white Saudi supporters. Thank you to NUFC for fighting this battle👏👏 ⚪️⚫️⚪️⚫️🤝🤝🦓🦓 pic.twitter.com/WonCDwhKlz