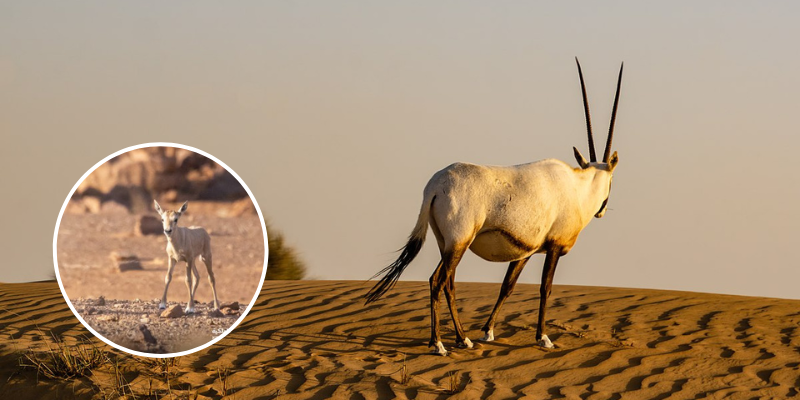 Centuries ago, the Arabian Oryx would roam around the deserts of Arabia in large herds in the wild. But those days have long gone as it went extinct in many of its traditional habitats. But it still remains wildly popular in the imagination of Arabs who continue to hold the animal in high esteem. Just an FYI, we love it so much here that it’s even on many logos including that of Qatar Airways’.

Saudi Arabia, like many of its neighbours, holds the Arabian Oryx in high regard and has over the years undertaken a number of initiatives to return it to the wild.

Their efforts finally seem to be bearing fruit now.

The King Salman bin Abdul Aziz Royal Natural Reserve (KSRNR) which spans four provinces in the country’s north has just witnessed the first-ever birth of an Arabian Oryx in the wild in about 90 years.

Look how cute it looks!

King Salman Royal Reserve witnessed the Arabian oryx give the first birth to a calf after the interrupted labor of the Arabian oryx species that lasted 90years!#KSRNR pic.twitter.com/Bma3QQpOxT

The International Union for Conservation of Nature designates the Arabian Oryx as a vulnerable species threatened with extinction.

This really is a pat on the back for all those involved in reintroducing this animal back in northern Arabia.