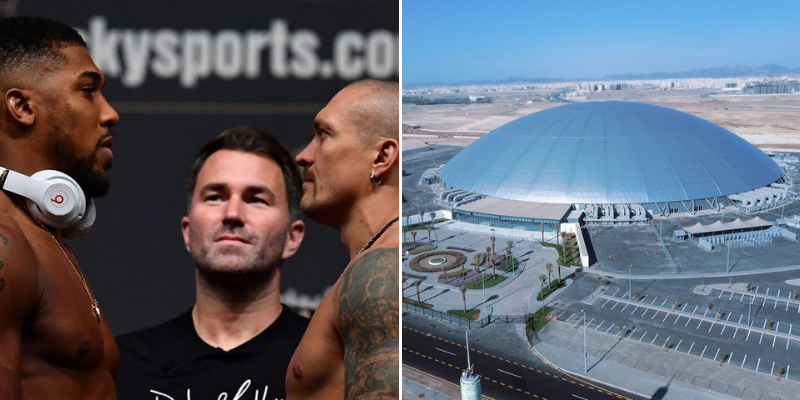 We don’t exactly when the much-hyped rematch between Anthony Joshua and Oleksandr Usyk will take place but a new news report in SkyNews mentions the venue as Jeddah’s Super Dome.

According to SkyNews, the Jeddah Super Dome’s administration has indicated that it is the favored location for the megafight.

The venue for the Oleksandr Usyk vs Anthony Joshua rematch in Saudi Arabia is reportedly set to be the Jeddah Super Dome. [According to @SkySports] pic.twitter.com/toezK563Qq

A quick recap, Joshua was soundly defeated by Usyk via unanimous decision (24-2, 22 KOs) back in September. Since then Joshua has found a new trainer and will have a go at becoming a three-time champion.

Coming to the venue, the Jeddah Super Dome is the world’s largest geodesic dome without pillars and can hold up to 40,000 people.

Back in February, the fancy venue hosted the WWE Elimination Chamber.

#WWE was back bigger and better last weekend at the world’s largest freestanding super dome in Jeddah. CT delivered over 1300sqm of LED across the main stage & entrance screen accompanied with a fully redundant E2 screen management system for the fantastic event. #CTGroupEvents pic.twitter.com/8JSEPNJjhB

There are reports coming in of delays in the fight but as things stand now the fight is most likely scheduled to take place on July 23. Whatever the date may be Jeddah has got an opportunity to host one of the biggest-ever fights.