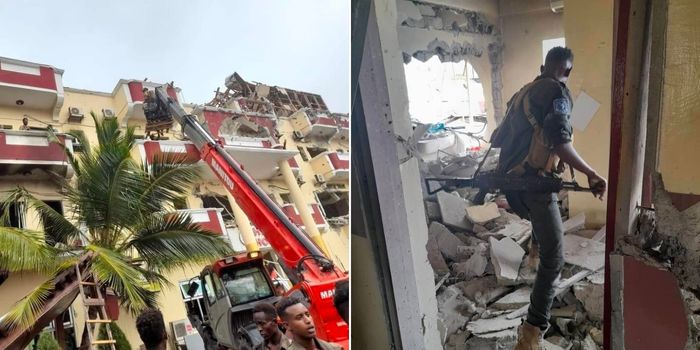 The UAE Ministry of Foreign Affairs And International Cooperation (MoFAIC) has released a statement condemning the terrorist attack that was carried out in a hotel in the Somalian capital Mogadishu, which has resulted in the death and injury of innocent people.

The Ministry of Foreign Affairs and International Cooperation (MoFAIC) affirmed that the UAE expresses its strong condemnation of these criminal acts and its permanent rejection of all forms of violence and terrorism aimed at destabilising security and stability in contravention of human values and principles.

SOMALIA:The latest pictures from Hayat Hotel in Mogadishu aftermath of the attack. pic.twitter.com/1ambZBlpFI

The Ministry further expressed its sincere condolences to the victims

The statement also extended wishes for a speedy recovery to the injured.

The Ministry expressed its sincere condolences and sympathy to the government and people of the Federal Republic of Somalia and to the families of the victims of this heinous crime, as well as its wishes for a speedy recovery to the injured.

I have lost over 8 of my relatives for the last night attack at #HayatHotel in #Mogadishu… May almighty have mercy on all of them and I pray for the quickest recovery to the injured ones… so sad some of the deceased just returned from overseas to visit relatives.

The attack began on August 19th, and just ended a few hours ago according to recent reports

The Somalian forces have just ended a 30-hour siege of the hotel, according to most recent reports. The Somalian media have reported this incident as one of the biggest attacks after their new president Hassan Sheikh Mohamud has come to power.

I received pictures from Mogadishu Hotel attack,but i cannot post because they are too graphic. Most of the victims were shot on the head. 20 + innocent civilians were slaughtered over the course of days. pic.twitter.com/UuzlJp1yLo

The attack in Mogadishu was carried out by AlShabaab militants and has caused the death of 20 civilians so far, with many more injured

#SomaliaAttack – Security forces have ended a siege at a #Mogadishu hotel after 30 hrs. At least 20 people were killed & dozens injured after gunmen stormed the Hyatt Hotel. #Somalia Police Commissioner has addressed the media at the scene of the attack pic.twitter.com/NGSy7LnNTs