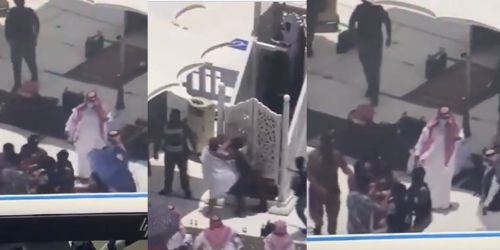 The Makkah region police have arrested a man at the Grand Mosque.

The man, in an Ihram, was seen charging towards the pulpit from which the imam was delivering the sermon before Friday prayers

The Grand Mosque's Security Forces arrested a man who tried to reach the pulpit from where the imam was delivering his Friday sermon #lovinsaudi pic.twitter.com/ldoMA3Kyrq

The man, dressed in an ihram and brandishing a stick, was quickly apprehended and legal procedures against him have been taken.

Further details have not been shared by the security authorities.

Read More: People Are Shocked At The Videos Of The Heavy Rains In Makkah Earlier This Week

The holy city of Makkah was been hit by heavy rains, hail, and flash flooding earlier this week.