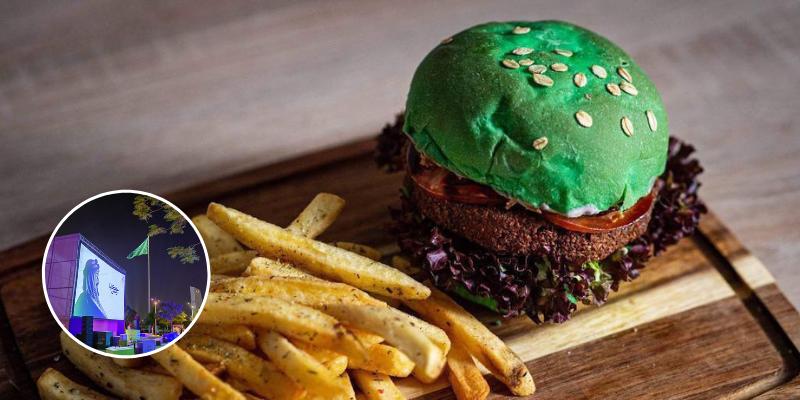 National Day is big business for all restaurants as everyone’s literally on the streets, away from Netflix. So yes, restaurants are cashing in by offering UNMISSABLE deals, making you want to choose them over any other place. The ones that are being covered in this list have a pan-Saudi presence, so whether you’re in Riyadh, Dammam or even Jeddah, you’ll be able to avail of all these deals.

Herfy’s food deal has been running since September 11th. The Saudi-chain is offering four burgers, two fries and two Pepsis for just SAR20. Just an FYI, you’ll have to place your order through the Herfy app.

Count on Little Caesar’s to always come up with the best National Day specials. This year, it’s doing it again, and it’s selling any large pizza and a 1-litre bottle of Pepsi for SAR20!

Green is in vogue this weekend, and so a green donut and coffee served in a green cup are just the dose of green your IG stories need. Krispy Kreme’s offering coffee and a donut (green one) for SAR8. The offer runs until September 25th.

I’m Hungry has got an absolute stunner of a deal this time around as it’s offering a massive meal that’s enough for the whole fam for SAR92. BTW, today is the last day of the deal.

Dunkin’s got a number of different deals just for National Day. One of the best one’s among them is one in which it’s offering an iced latte and a green glazed donut (yep, green again) for SAR9. The offer’s valid till the 24th.

With so many burger chains offering deals this National Day, how can our homegrown Burgerizzr be missing out on the action? It’s slashed the price of its 6 pcs burger meal box to-you guessed it-SAR92.

The hugely popular Egyptian Koshary restaurant always has queues outside its branches on National Day as they slash the prices by half. It’s done it this year too. At the end of those lines come those mouthwatering boxes of Koshary.

Okay, not exactly a food deal, but you’re getting a medium-sized popcorn and two glasses of Pepsi along with two movie tickets for SAR92. The deal’s on till tomorrow.

Go to any Overdose outlet and chances are that you’ll have to wait in line to grab a cuppa as it’ll almost always be brimming with coffee lovers. This time it’ll probably have even more crowds as it’s offering a second cup of cold coffee for just SAR1!

Wister has been opening up a spree of branches all around the country lately. People are taking to its freshly made burgers in droves and if you haven’t tried it yet, then now could be the time as it’s literally offering a massive meal for SAR92. The best part is that the offer is running till the 26th, so you can ideally grab up some of the other deals listed above before heading to Wister on a later date.