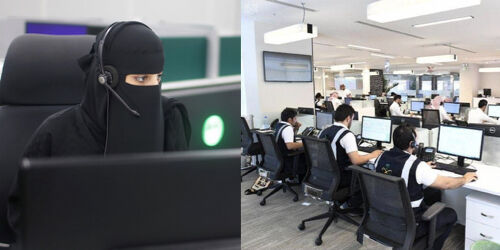 A decision to hire only Saudis in remote customer service came into effect earlier this year and serves to create 20,000 jobs by the end of 2022.

Already, the decision has created more than 8000 jobs

The decision was announced in February by  Minister of Human Resources and Social Development, Ahmed Al Rajahi, to limit remote customer service jobs to just Saudis.

This decision applies to all establishments in the kingdom whether the establishment has directly contracted the employed or indirectly through a communication centre.

The Ministry of Human Resources has also recently disclosed a plan to localise the kingdom’s real estate sector, designed to provide over 11,000 jobs for the Saudis.

Read Next: Update: Saudization In Shopping Malls Will Create 51000 Jobs For Saudis

The Ministry of Human Resources and Social Development has issued the procedural guide for the decision to implement Saudization in shopping malls across the Kingdom.

The new decision will come into force on August 4

The announcement clarified the decision to Saudize most jobs in shopping malls with the aim to create 51,000 additional jobs for Saudis.

Other professions that are excluded from 100 percent Saudization are cleaning work, loading and unloading, maintenance of recreational facilities, and barbershops.

The ministry said that punitive measures will be taken against the violators after the end of the grace period. There will be penalties for two types of violations: hiring non-Saudis in professions restricted for Saudis and penalty for the failure to implement the percentage of Saudization.