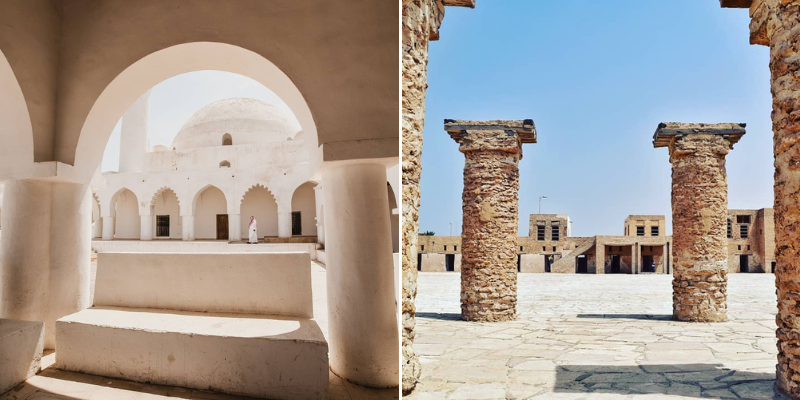 This month, people from A to A (America to Australia), the east and west of the globe, are flocking to Qatar. For many, this is probably the first time that they’re venturing into this part of the world, and it honestly would be a shame if one came this far and left without exploring the enigmatic wonders of Arabia.

Hayya cardholders are being given multiple entry visas to Saudi, where they can stay for up to 60 days. And, guess what? You won’t have to venture far from Qatar. Our list covers some amazing sites in Saudi Arabia located within a few hours’ drive of the Saudi/Qatar border.

If those tales of Arabian Nights and scenes of oases from Aladdin have caught your fancy, now is your opportunity to visit one. And not just any—Al Ahsa Oasis is the largest in the world. The sea of green palm trees magically rises from the barren desert. It’s a sight to behold.

This naturally formed labyrinth runs for approximately 2km with most of it being open to the public. Since the labyrinth runs mostly above ground, you’ll have places where the light will peek through, illuminating certain parts of the cave. The setting is almost perfect for the next Marvel film.

There’s nothing yellow about this lake called Yellow Lake. If you love bird-spotting, then this is without a doubt the first place on this list that you should be visiting. Depending on the season (now’s a good one), many migratory birds pass through here, and you’ll get to see a lot of them even on a bad day.

The fort in Uqair has been beautifully restored and will look great on your Instagram feed. Although it was more of a customs house than a military fort, despite its name, it was nevertheless historically noteworthy because it witnessed certain notable events, such as the Uqair Convention. There’s a beach right by the fort, and it’s an incredible place to bathe in the sun sans the crowd.

The historic city of Hofuf is the closest big city to Qatar on the Saudi side. The city is home to numerous historic sites, but if there was just one that you could visit, it probably should be the Ibrahim Palace. The palace is home to a picturesque mosque and gives you a fab insight into life in Arabia at the turn of the 20th century.