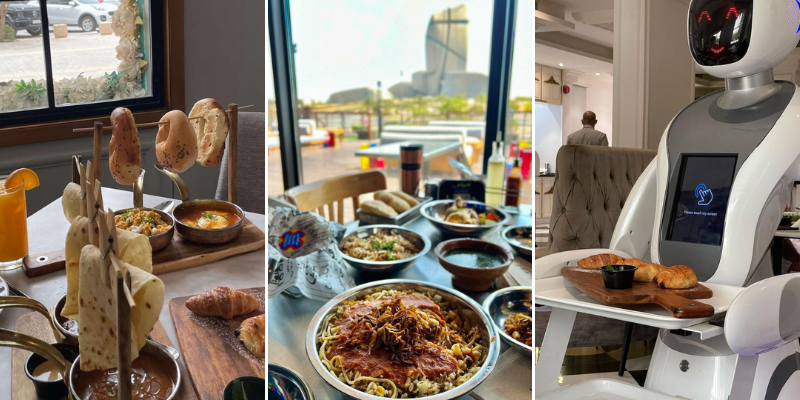 If you’re not an early bird, then you’ve got to check out this list of fab Instagram breakfast spots that will make you an early riser. The photos that you’ll post on the ‘gram later are enough to make anyone green with envy. Here’s a round-up of the best of ‘em.

Zooba is a popular street-food chain originating from Egypt. Its inclusion on this list is due not only to the vibrant colours of the interior but also to the fact that it serves some of the best tamiya and koshary in the capital. It’s also light on the wallet, too, so you get to slay the ‘gram without burning a hole in your purse.

It’s difficult to describe the cuisine here, it’s more of a mishmash between Mediterranean and American West Coast, and that’s probably just the motivation that some need to get out of bed and head here for one fine breakfast.

How can we have a list of the most Instagrammable spots (breakfast or anything) and not have El&N, which has a rep for being London’s most Instagrammed cafés, in it? The overdose of pink here will deffo provide a crazy amount of colour to your feed. Oh, and by the way, those fluffy Dutch baby pancakes are unlike any other you’ll get in the city.

Brekkie claims to offer all-day brunch, so even if you wake up late and still don’t want to miss out on breakfast, then this is where you should be heading. Originally from Bali, once in Brekkie, you’ll feel that you’ve been magically transported to some upscale breakfast spot right in the tropics. The juices here are so good that you may want to swap your daily dose of caffeine for them.

Keep your phones ready even before you step foot into the restaurant, as the place looks fab even from the outside. It gives you the vibes of more of a high-tea place rather than a breakfast one, but that doesn’t make it any less of a spot to grab some delectable pancakes and classic French toast.

It’s hugely popular, so you’ll have a tough time snapping photos of the gorgeous setting, but you’ll still have the beautifully presented breakfast dishes on your table to snap. Don’t be afraid to try some of the more unusual items on the menu here that go with names like “open-heart eggplant” and “forbidden porridge.”

If you’re looking for something gourmet in the morning, then look no further than Opla to have a scrumptious breakfast to kick-start your day. There are a lot of classic breakfast dishes on the menu, with a lot of sugary treats on offer. Those with a sweet-tooth are absolutely going to love this.