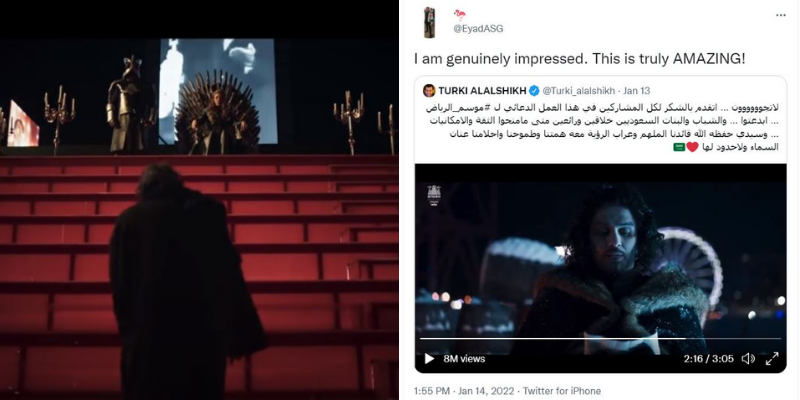 “Game of Thrones” fans rejoiced at the Riyadh Season 2022 advertisement, that was trending last Friday.

The launch of the new Riyadh Season 2022 was celebrated through scenes and clips inspired by the famous show. Fans took to Twitter to celebrate the excitement, applauding the creators and cast of the advertisement. Saudi royal court advisor, Turki Alalshikh stars as the Night King and is accompanied by other famous artists/actors of the Kingdom.

He tweeted his gratefulness to participate and experience such an important part of history, praising the capabilities and innovative minds of the Saudi community.

Saudi filmmaker Mohammed Almulla was the mastermind behind the advert, directing the famous clip which generated over 3.8 million views!

One Twitter user, Majed said: “As usual, Almulla is creative in his directing.”

Other commentators also celebrated the diversity and creative space being brought into the Kingdom’s society, allowing creators to go achieve such milestones.

What we couldn’t even imagine in a day dream is a reality in the modern version of country, a notable Saudi cleric is heading the cast in a promotional film for Riyadh entertainment season ! https://t.co/LAcL952ZiL

I am genuinely impressed. This is truly AMAZING! https://t.co/CppY4dGEwo

Riyadh Season itself has attracted over 6 million visitors since opening, and will continue on until March 2022.

Check out the full ad here