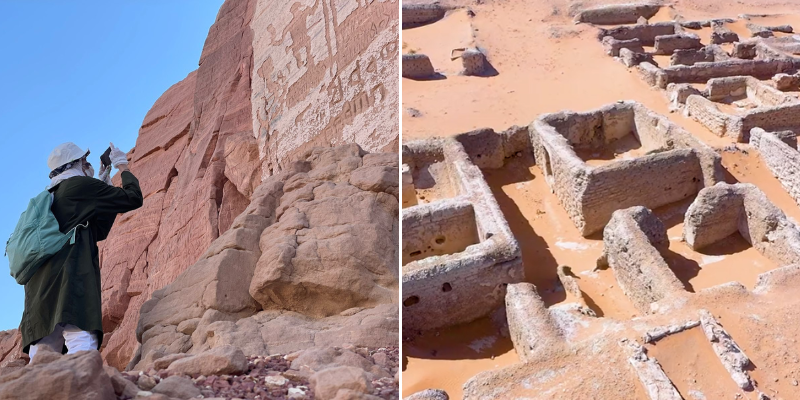 Al-Faw which sits in a remote corner of southern Saudi Arabia is one of the richest archaeological sites in the country – it’s honestly surprising that it’s still not on UNESCO’s World Heritage List so far. But that probably won’t be the case for long as a flurry of new discoveries have been unearthed yet again in the once ancient thriving town. The Saudi Heritage Commission released their new discoveries earlier this week.

A group of Saudi and French archeologists comprised the team that excavated the site of Al-Faw – the ancient capital of the fabled Kingdom of Kindah.

In cooperation with our expert partners, our project in the Cultural Landscape of Al-Faw Archaeological Area has resulted in groundbreaking discoveries.#SaudiHeritageCommission pic.twitter.com/uoRufWsxCc

One of the biggest findings here was a rock-cut temple and pieces of an altar, which is where the people of Al-Faw would are believed to have performed their rites and celebrations.

The temple was discovered to the east of Al-Faw, atop Mount Tuwaiq.

We are excited to announce that a team of Saudi and French archaeologists have uncovered new findings in the Cultural Landscape of Al-Faw Archaeological Area in southern Riyadh, providing significant information about ancient human settlement.
#SaudiHeritageCommission pic.twitter.com/ilRX9C0CLF

Our team of archaeologists used state-of-the-art technology to survey the Cultural Landscape of Al-Faw Archaeological Area, uncovering a range of hidden treasures.#SaudiHeritageCommission pic.twitter.com/mHziAvF8po

The excavations also found a sophisticated irrigation system constructed by the people of Al-Faw to supply rainwater to the agricultural lands. This system included canals, water cisterns, and hundreds of pits.

So yes, this could well be Saudi Arabia’s biggest archaeological discovery yet.

It was not an ordinary feeling, when I stood on the ruins of the ancient Al-Faw Archaeological Area.||2021🤎🙏🏻#SaudiHeritageCommission#هيئة_التراث pic.twitter.com/GQmjkkw4bq