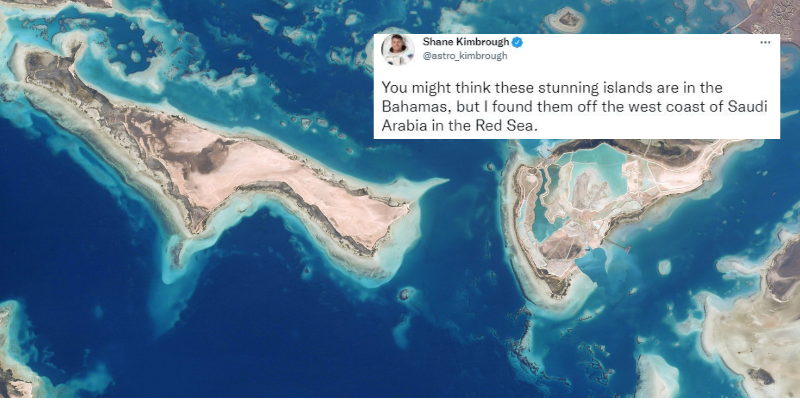 This photo was tweeted by NASA astronaut Shane Kimbrough who accompanied it with a caption that reads “You might think these stunning islands are in the Bahamas, but I found them off the west coast of Saudi Arabia in the Red Sea”.

You might think these stunning islands are in the Bahamas, but I found them off the west coast of Saudi Arabia in the Red Sea. pic.twitter.com/jn0kG963n6

He earlier shared another photo of Saudi Arabia from the International Space Station that showed Saudi Arabia and Egypt with the Red Sea running between them. STUNNING!

Looking west over the Red Sea, Saudi Arabia and Egypt. #EarthArt from the amazing @Space_Station. pic.twitter.com/52QjEyRid9

And, this is Jeddah as seen from space. The new airport looks sleek.

Hello Jeddah, Saudi Arabia! This modern city on the Red Sea serves as a gateway for pilgrimages to the Islamic holy cities of Mecca and Medina. #airportsfromspace pic.twitter.com/nATLz4UlQc