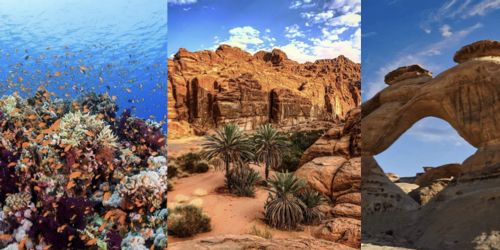 Mountains, plains, the coast, ancient landmarks, a cuisine that brings together the best of the region, and a short distance from what is going to be the world’s most iconic planned cities; Tabuk is THE hidden hotspot when you’re looking for the perfect Middle Eastern holiday.

Located in northwestern Saudi Arabia, the Tabuk region is in very close proximity to Egypt and the Levant and, because it is so close to the Red Sea, it also been a host to centuries of travelers passing through – there are two sub-merged shipwrecks that encapsulate this.

But Tabuk’s history starts a lot earlier than that

In fact, one of the oldest human settlements discovered in Saudi Arabia is located in Tabuk. The Ruins of Tayma are believed to have been inhabited initially during the Bronze Age and are home to countless artifacts.

Then there is also Al Bida that has several burial sites (both, Nabatean and Greek). The area is also believed to have been where Madyan, a town mentioned in Abrahamic scriptures, used to be.

And the majestic mountain, Hisma, also has evidence of ancient Kufic Arabic inscriptions, dating to the early days of Islam – making it a perfect trip that involves scenic sightseeing and a dive into history.

In fact, there is just so much history, museums, and archeological sites in Tabuk that it is best to get experts to curate the ideal trip so nothing is missed out on.

But Tabuk isn’t just exciting for its history – the present is (and the future) is just as exciting. The region’s cuisines have influences from the regions it shares a border with (who doesn’t love Levantine food?). And always expect the freshest seaside flavors possible!

Not to mention, Tabuk is just a short drive away from NEOM, the upcoming planned city that’s making headlines every day

NEOM is the cornerstone of Saudi Vision 2030 and is going to be the home and workplace to more than a million residents from around the world. It will include towns, cities, sports venues, entertainment venues, and will be the benchmark of all things tourism in the coming years.

And it is just breathtaking

With honorable mentions going to its corals!