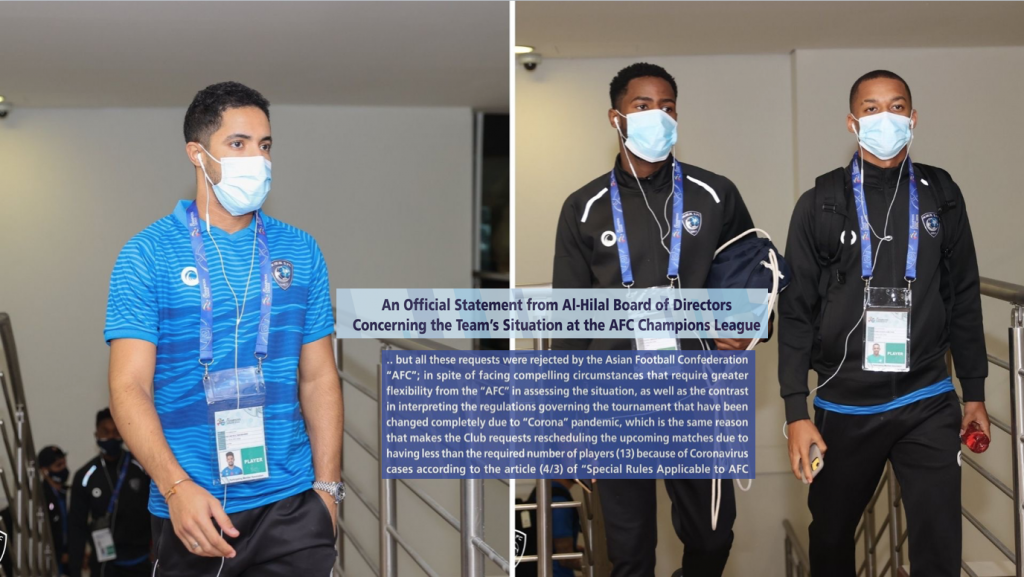 Al Hilal Saudi Club puts out their first statement last night on what’s been happening the past two days in regards to their negotiations with the Asian Football Confederation, and that’s after the club has revealed that more than 30 player of their have tested positive for COIVD-19 and requested the postponement of their matches that was scheduled against Shabab Al Ahli Dubai, which was set to be played yesterday at 9pm in the AFC Champions League.

📄 The Club management has just received a rejection letter from the AFC for the request to postpone #AlHilal match against “Shabab AlAhli Dubai”; that will be played today Wednesday evening at 9pm..

Despite all of that the team didn’t give up and arrived yesterday to the venue of the match at the scheduled time to play the match with less than the required number of players due to the situation that the team was facing.

But then the match was cancelled by the match commissioner…

📄 The match commissioner of (Al-Hilal Vs Shabab AlAhli Dubai) has decided to cancel the match .. #AlHilal #ACL2020

📄 An Official Statement from #AlHilal Board of Directors Concerning the Team’s Situation at the AFC Champions League pic.twitter.com/5CfEQuyG7B

The board of directors has also clarified that they sought to work on a number of methods that preserve Al-Hilal’s right to compete without any disorder to the tournament, and the most prominent of them as follows:

but all these request were rejected by the Asian Football Confederation.

The Board of Directors expressed surprise at what was stated in the “AFC” statement, which included that they maintained communication channels with the club and dealt in a timely manner with its requests and concerns, while they haven’t ever responded to the club’s requests to postpone the previous match against the Iranian team “Shahr Khodro” ,and did not fulfill the club’s early demands to change the delegation’s residence as poorly ventilated space; in order to reduce the risk of the infection

After that the Board of directors of AL Hilal Club ended their statement with a positive note expressing their pride on how the team handled the situation responsibly ever since the first case of player testing positive for COVID-19 and then thanked the club’s loyal fans that showed endless support and love for the team.