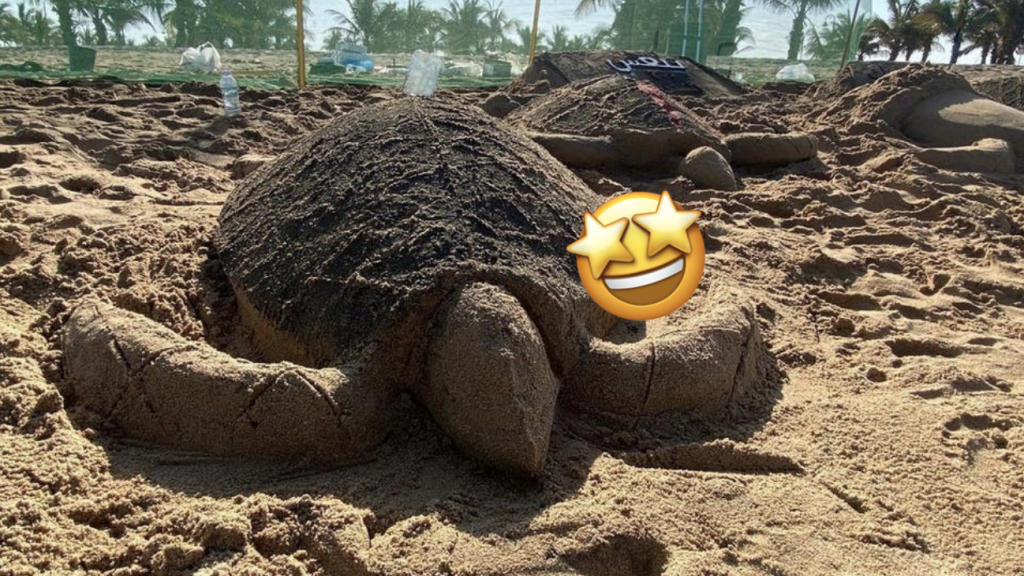 Saudi plastic artists surprised visitors of Yanbu Beach with turtles and an acrobatic shark carved on the sand.

The most important message they want to convey from this work is to shed light on the issue of preserving the wealth, fish and marine spirit in the Kingdom, because as you did not know, an ugly video clip spread a while ago, in which people appeared encroaching on huge turtles and threatened with extinction in the world. Undoubtedly, this behavior has not gone unnoticed, and the necessary measures have been taken against the people who appeared in the transgression section. Today, the atmosphere of these creative people, artists Abdullah Al-Harbi and Bandar Al-Bishi, are making their mark on this issue through their talent, through art and sculpture with sand, and they conveyed a beautiful message to the world.

Artists Abdullah Al-Harbi and Bandar Al-Bishi sat for more than two weeks carving on sand in Yanbu, an average of 8 hours a day

After Abu Wadih, I expect we all know the whale shark or the acrobatic shark. Abu Wadih, I have what he knows. A clip of him spread over the back of the Tumbler shark in the middle of Bahr Yanbu (the Red Sea), between the reactions of admirers who were impressed with his courage, and between opponents who were greatly dissatisfied with His behavior. The acrobat shark is an endangered fish and is characterized by its enormous size, which reaches about 19 meters

The biggest challenge Al-Harbi and Al-Bishi faced while working was the strong winds, and the fear of people tampering with the sculptures, but in return they received great support and turnout

Their attention was drawn to the smallest details, even the turtle eggs that they carved

Read: Pictures … New views of the beauty of Amalaj, the bride of the Saudi summer this year