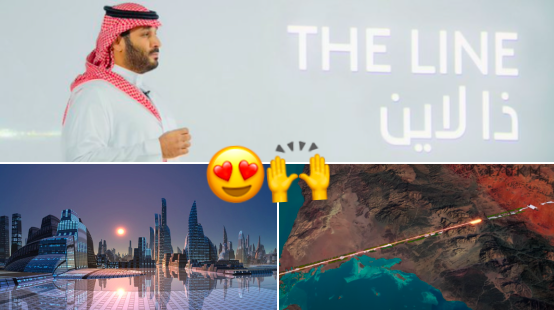 The Crown Prince Mohammed bin Salman, in his capacity as the Chairman of NEOM, has announced the launch of the “The Line”, city in NEOM, that is going to be like nothing ever before,

The City of “The Line” will be made up of interconnected communities, enhanced with artificial intelligence and spanning over 170 km

It is also going to be a noise and pollution-free ecosystem that welcomes a new, sustainable future.

In the launch video, the Crown Prince said: “Throughout the ages, cities were built in order to protect people in narrow spaces, and after the Industrial Revolution, cities were built to place the machine, the car and the factory before mankind. The cities that claim to be the best in the world, where people spend years of their life in order to move – and this period will double in 2050. And one billion people are expected to be displaced due to high carbon emissions and rising sea levels.”

He continued in his speech: “We need to renew the concept of cities into future cities. Today, as Chairman of NEOM, I present to you – The Line.”

“The Line” city will redefine the concept of urban development through the development of societies that center around people, not industry. This enhances the quality of life and ensures access to all basic service facilities, including medical centers, schools, and facilities. Entertainment, as well as greenery – all in a walking distance.

High-speed transportation solutions will make commuting easier – he most distant journey on “The Line” is expected to last only 20 minutes, which will provide a living balance between a business environment that incubates innovation and an exceptional quality of life for residents.

Communities of “The Line” will be managed entirely by relying on artificial intelligence technologies to facilitate the process of communicating with humans in a way that enables them to anticipate and interact with unprecedented capabilities, thus saving residents and companies’ time.

Development of The Line will begin during the first quarter of 2021, as it forms an important part of the extensive development work underway in NEOM.

The NEOM project is one of the giant projects within the diversified investment portfolio of the Public Investment Fund.

And a direct response to the challenges of urbanization that hinder the progress of humanity, such as dilapidated infrastructure, environmental pollution, and urban and population sprawl.

The City will work to achieve the goals of the Kingdom’s Vision 2030 in terms of economic diversification by providing 380,000 job opportunities, and contributing to adding 180 billion riyals (48 billion US dollars) to the gross domestic product by 2030.