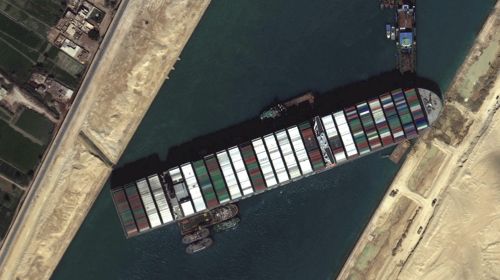 Saudi Arabia’s foreign ministry has made a statement to point out that the Kingdom appreciates and supports Egypt’s efforts to efficiently dislodge a giant container ship blocking the Suez Canal.

Suez Canal is one of the world’s busiest waterways and about 15 percent of world shipping traffic transits the canal and hundreds of vessels are waiting to pass once the blockage has been cleared.

The Kingdom expressed its great confidence in Egypt’s ability to deal with the crisis in the canal.

The statement added that the Kingdom stands with Egypt and is ready to extend its capabilities to support efforts made by the Egyptian authorities to deal with this incident and its consequences.

Meanwhile, social media has a new hot topic for the memes

my solution for the Suez Canal problem pic.twitter.com/pc1hCR4hsr