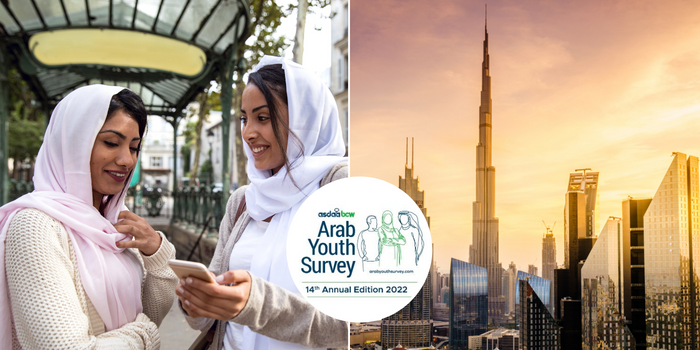 The findings of the 14 Annual ASDA’A BCW Arab Youth Survey have finally been published!

One of the most important research pieces produced out of the Middle Eastern and North African regions, the Arab Youth Survey helps understand the attitudes and aspirations of the over 200 million youth residing in the region.

It is a crucial piece of information for governments, the private sector, multilateral institutions and academia as it plays a crucial role in policymaking and future strategy. Keep scrolling to read some valuable insights!

The Survey held some exciting results for the UAE, which remains an ideal country for the eleventh year in a row.

The Arab youth wish to live here or want their countries to imitate the ideals of the UAE.

Conducted from May 13 to June 16, 2022, the Survey covered 3,400 young Arabs through face-to-face interviews conducted by professional interviewers. The interviews were completed in Arabic and English with young Arab men and women. The sample split was 50:50 male/female. 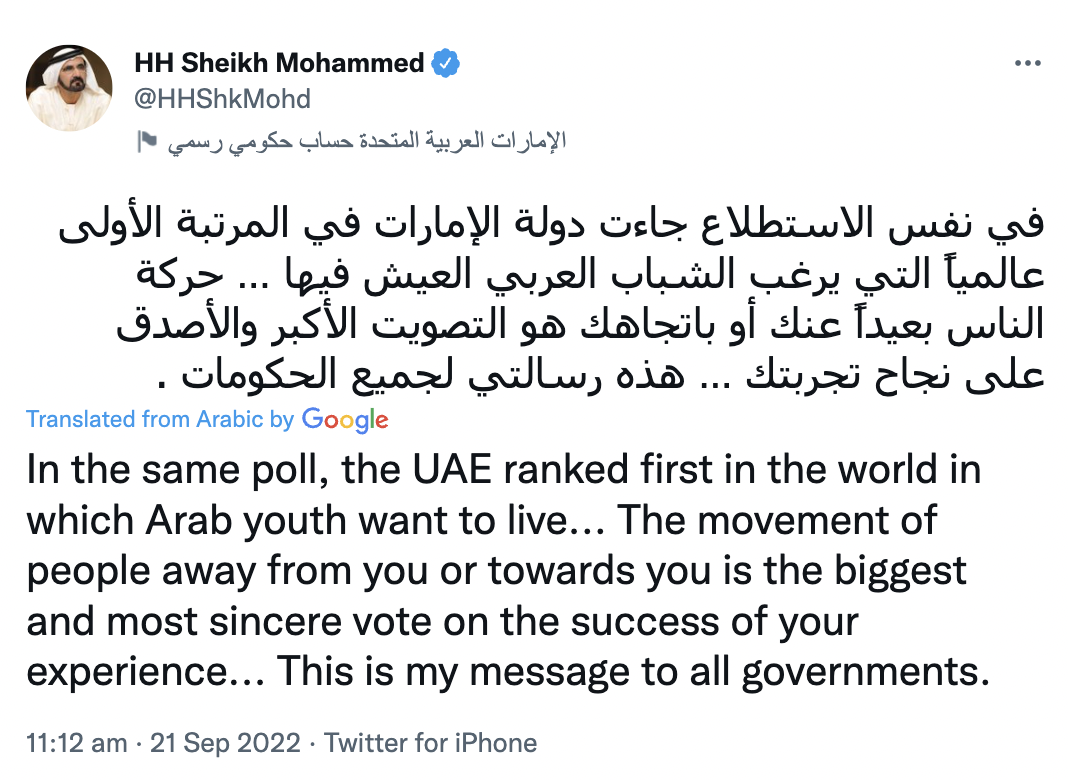 6. My Identity- Religion is important to the youth

Religion is central to the personal identity of young Arab; yet they want religious institutions to reform.

Many Arabs believe that religion is a very important part of their personal identity, and they are concerned about the loss of traditional values and culture. 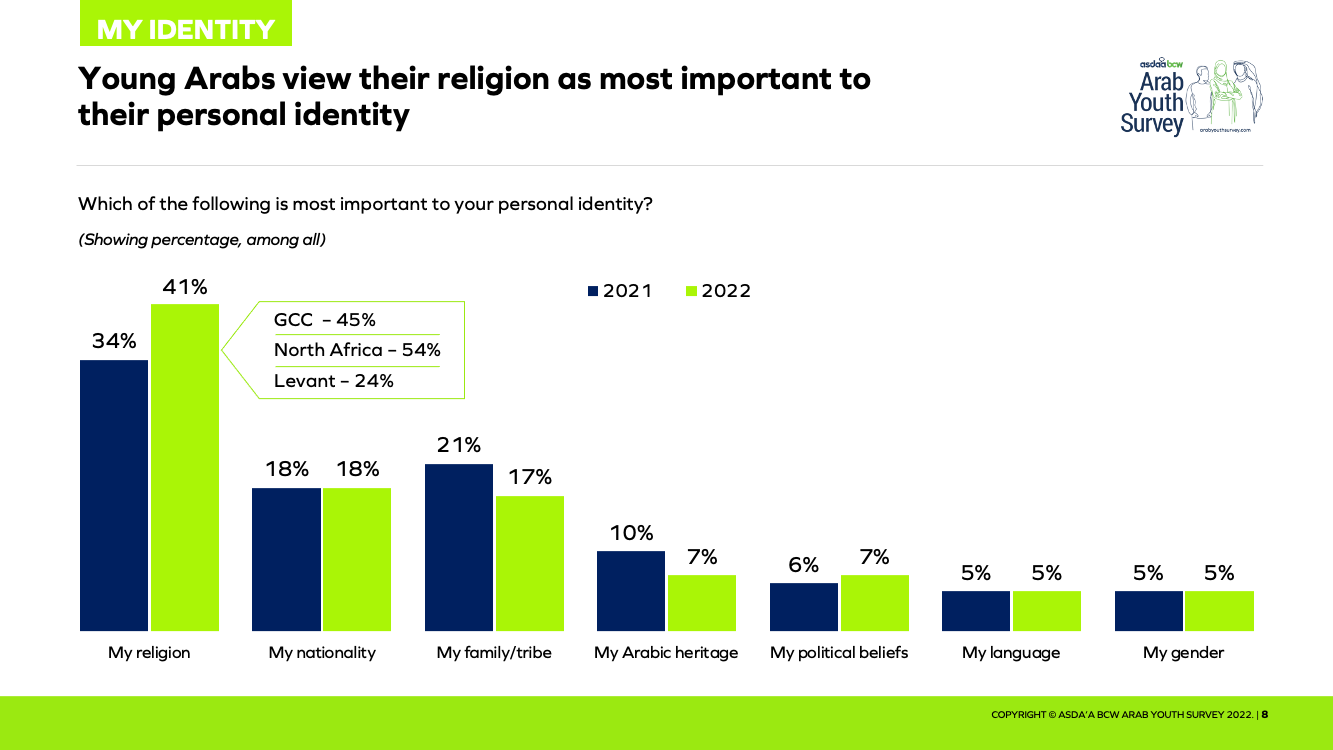 5. My livelihood- The youth are finding ways to be self reliant

Young Arabs are concerned about the quality of education, lack of jobs, and rising personal debt, and many are turning to entrepreneurship, rather than depending on government or private sector jobs.

The UAE there has been a new programme for more private sector jobs for Emiratis, I think there’s been a mjor thrust on that, and you can see that across Saudi, across Kuwait, across all the countries especially in the Gulf. But while that goes on, how much more jobs can the government create? I think most government’s are maxxed out…I think it’s time for private sector to look at making jobs interesting for nationals in each of those countries. I think the rise of entrepreneurism is a fabulous finding in terms of the fact that young people want to be more self reliant.

4. My politics- The Government has implemented the right policies to address issues important to the youth

The Arab Spring was a series of anti-government protests, uprisings, and armed rebellions that spread across much of the Arab world in the early 2010s. The protest first started in Tunisia and was in response to corruption and economic stagnation.

Many of the youth believe that democracy will never work. The GCC regions believe that the existing government has implemented the right policies to address issues important to them. 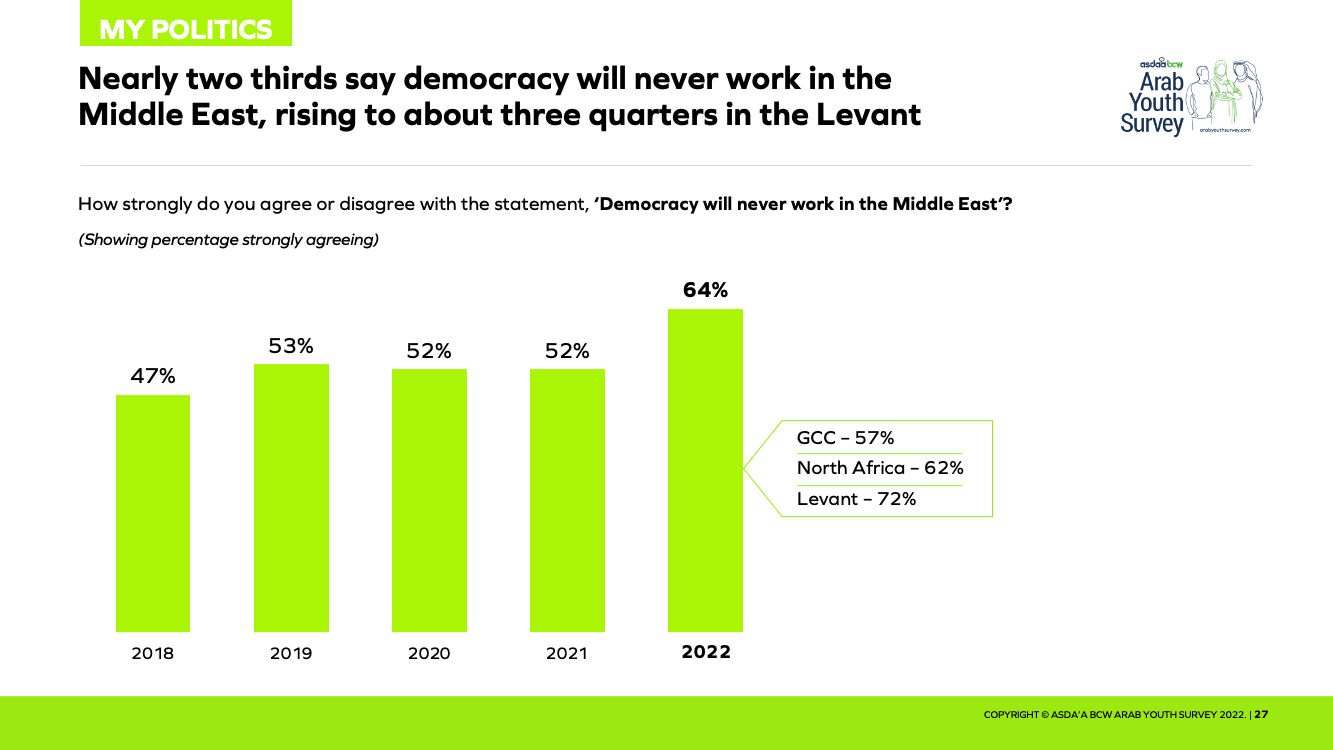 3. My global citizenship- UAE is the country that the youth would like to reside in

For the 11th consecutive year, most young Arabs say that the UAE is the country they would most like to live in and their own nations to emulate; dynamic shift in outlook on foreign affairs, with China emerging as a top ally.

The major reasons for choosing the UAE are : 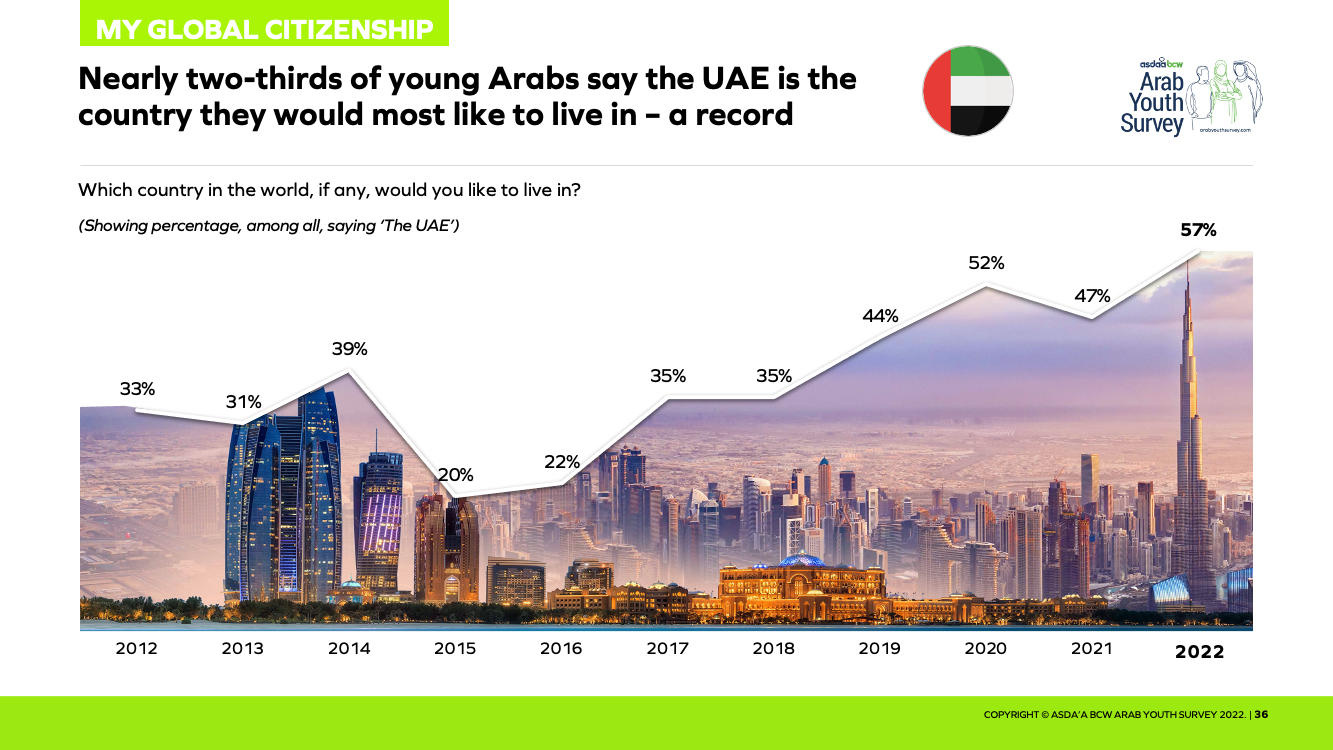 2. My lifestyle- The youth spend more time on social media and struggle to disconnect; online shopping is booming

Social media has slowly evolved into a top source of news, however, social media influencers are not considered trustworthy in comparison to TV and newspapers.

Financial situation is the biggest stress that the Youth of today are facing. 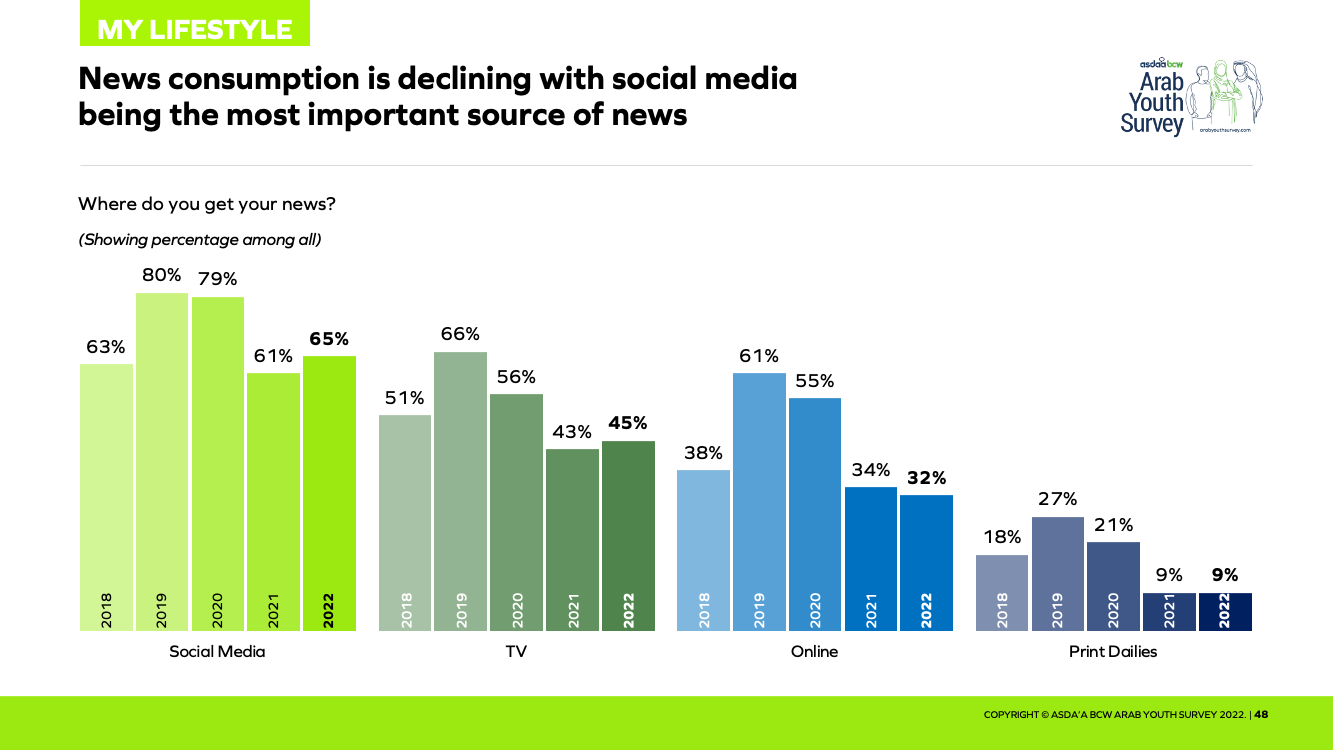 1. My aspirations- The most optimism in the past three years have been recorded this year

Majority of Arab youth are optimistic of better days but many fear their national economies are headed in the wrong direction and nearly half are considering emigration.

The youth have the highest level of optimism since the past three years for their future. Emigration is at the top of the mind for many. Canada, Germany and the United States are the most popular destinations. 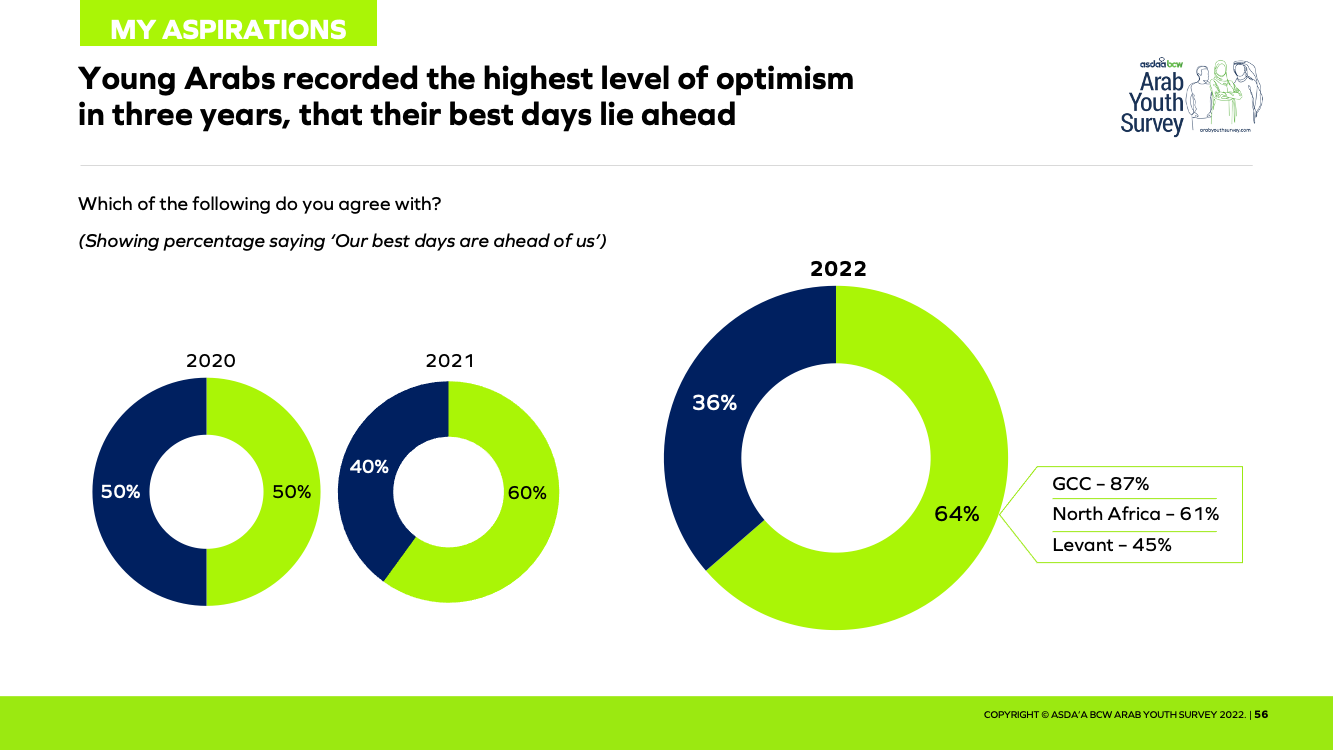 Watch The Lovin Dubai Show: The “Missing’ Girl In Sharjah Has Been Found