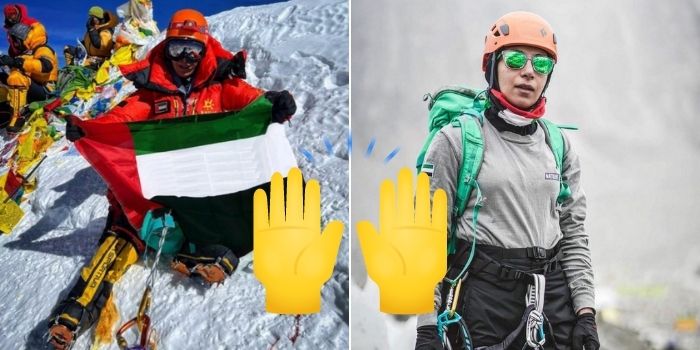 One for the record books!

A massive shout out to Nayla Nasir A Albaloushi, the Emirati/Uruguayan who has become the first Emirati lady to stand on top of the world!

At 8am, on May 14, Nayla stood on top of the world’s tallest mountain peak, landing her a spot in the history books as the first-ever Emirati female to reach the 8848.88m location. Her expedition was led by Chhang Dawa Sherpa of Seven Summit Treks, according to Everest Chronicle.

Nayla Nasir A. Albaloushi from the United Arab Emirates, raised the flag of her country

on the top of Mt. Everest 8848.86m on 14 May 2022 becomes the first-ever Emirati female to climb the world’s highest peak.Nayla is a part of Seven Summit Treks Everest Exped. 2022 Spring.

Her news follows that of Dubai-based Manal Rostom, who became the first Egyptian lady to summit Everest – the news was also announced this week

Manal summited on May 16 at 6:30am and she finally got to base camp safely.

In the video shared of the historic moment, she’s with Anup Gurung who helped her get to the top, and who also said his hands were frozen (we can only imagine). She says she’s the first Egyptian woman to summit Mount Everest as she holds the flag. “A 15-year old dream has finally come true,” she wrote. Such a proud moment for Manal and Egyptians!