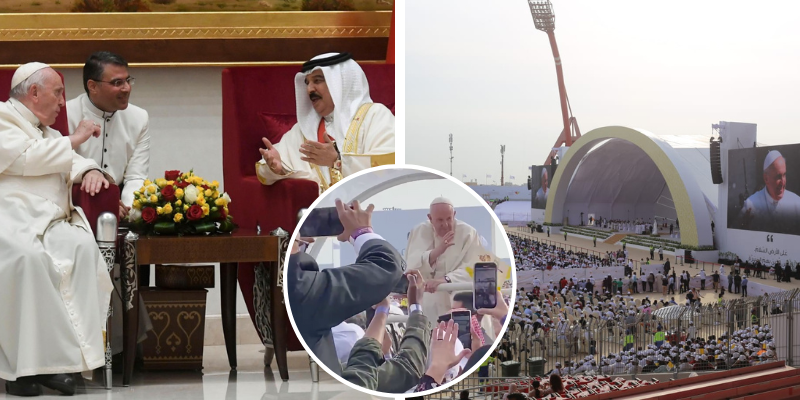 Pope Francis arrived in Bahrain on Thursday, November 4th, making this past weekend quite an eventful one for the Kingdom

The Pope arrived for a four-day tour of the Kingdom, in which he first visited the Bahrain Forum for Dialogue: East and West for Human Coexistence in Awali, where he also met Muslim leaders. The Pope then made his way to Our Lady of Arabia Cathedral for Mass, prayer, and meetings with the Catholic community of Bahrain.

Pope arrives at Bahrain’s national stadium to cheers from the faithful #PopeinBahrain pic.twitter.com/kbuczXvImQ

More than 30,000 people gathered at the site Friday night, in excitement to see the Pope on Saturday, November 5th. Some arrived a little past Friday midnight, just to secure a good seat at the location!

Amazing to witness Pope Francis and top Sunni #Muslim religious authority, the Grand Imam @alimamaltayeb, in #Bahrain alongside Cardinals from the #Catholic Church and imams from @MuslimElders. 🤝 ✝️☪️ Christians and Muslims standing together side by side as we should! pic.twitter.com/5HLR1AIJsS

Pope Francis arrives in #Bahrain for his 39th Apostolic Journey abroad, the first papal visit to the country. His 4-day visit focuses on the themes of interreligious dialogue, fraternity, and closeness to Christians living in the region.#PopeInBahrain pic.twitter.com/tJPAtzZKkN

He even posted this Tweet about Bahrain, after his arrival

The Kingdom of #Bahrain Declaration teaches that “whenever hatred, violence and discord are preached, God’s name is desecrated”. The one who is religious strongly rejects the blasphemy of war and the use of violence. #ApostolicJourney