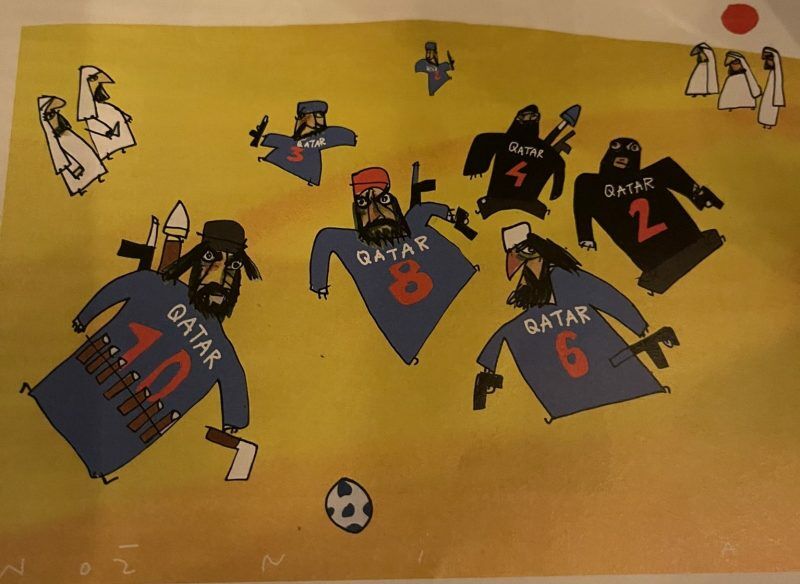 An instance of French-born racism and xenophobia has attacked Arabs as the FIFA World Cup Qatar 2022 is just around the corner.

After publishing a cartoon of Arabs wearing football uniforms as terrorists, the French weekly paper has come under fire from social media users for its bigotry and Islamophobia.

The image makes overused use of “savages”—angry, dark-haired males with “long beards,” hostile expressions, and weapons like knives and guns.

One of the characters is depicted as wearing a ski mask with an AK-47 and a rocket launcher in their hands.

The racist caricature supports the xenophobic and orientalist stereotypes that Arabs are “backwards”, and depicts the characters using crude tools by carrying dynamite stick bombs around their waist and machete knives.

The cartoon, unsurprisingly, sparked outrage across Twitter and other social media platforms. One user said that France is “a racist nation, it has not yet apologized for its criminal acts in Algeria and the rest of Africa, and is still stealing the wealth of its people so that the French can live in luxury at the expense of the looted peoples. Do not be surprised by them and their likes if they want to steal your achievement or your joy!”

The xenophobic sentiment is particularly ironic considering that France and Qatar have close political, economic, and diplomatic connections.

France is one of the countries that receives the most inward investment from Qatar globally. Paris Saint-Germain, a football team from the French capital city, is even owned by Qatari figureheads.