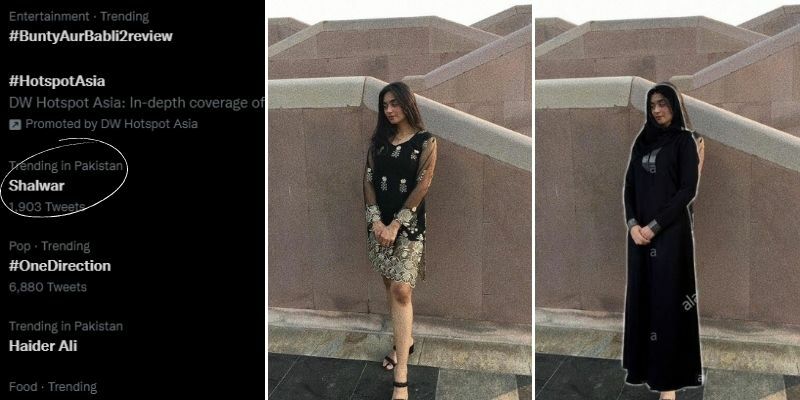 Recently an influencer on Twitter has been under fire for posting controversial images of herself. she is seen wearing a black kameez without a SHALWAR! However bizarre this seems, lets find out the answer to the question everyone is asking.

idk but black is my favourite colour pic.twitter.com/N3pbJPWiDs

“The point is I’m not wearing pants cause meri marzi“

Alina khan, the person behind the photo seems like your everyday Twitter influencer. Until you actually open the explore page and find people calling her all kinds of names. She seems to have the Twitterati by the jugular due to her bold expression of opinion.

We understand the metaphor in the photo. It’s a commentary on the freedom of choice in a society that functions on a very strict set of rules. But do the haters understand?

Just respect our culture dress….shalwar nhi phehni then u can put bra instead of kameez…

“Bloody liberalzzz back at it again!”

The photo causes a massive cognitive dilemma in the minds of the Pakistani audience. No one is tolerant enough to really understand what has been really shown in this photo. When they see a girl without pants, they go straight to calling her a “prostitute” and an “attention-seeker”.

Even if she is both of these words and the message is not even as philosophical as we perceive it to be, can’t we all collectively ignore it?

Gaining popularity is so easy these days, just take off your pants! or shalwar in this case…

Maybe it is Ayesha…

Culture and especially, clothing, is everchanging. A dupatta has become a rare sight in Islamabad but do we need to do something about it? Absolutely not.

All people really did on Twitter was make fun of her Ghutnayyy (knees). What a fall from grace.

Now our most educated response to a cultural debate is…Body-shaming!

Enjoyed that burger opinion? See what a burger has to say about BURGERS