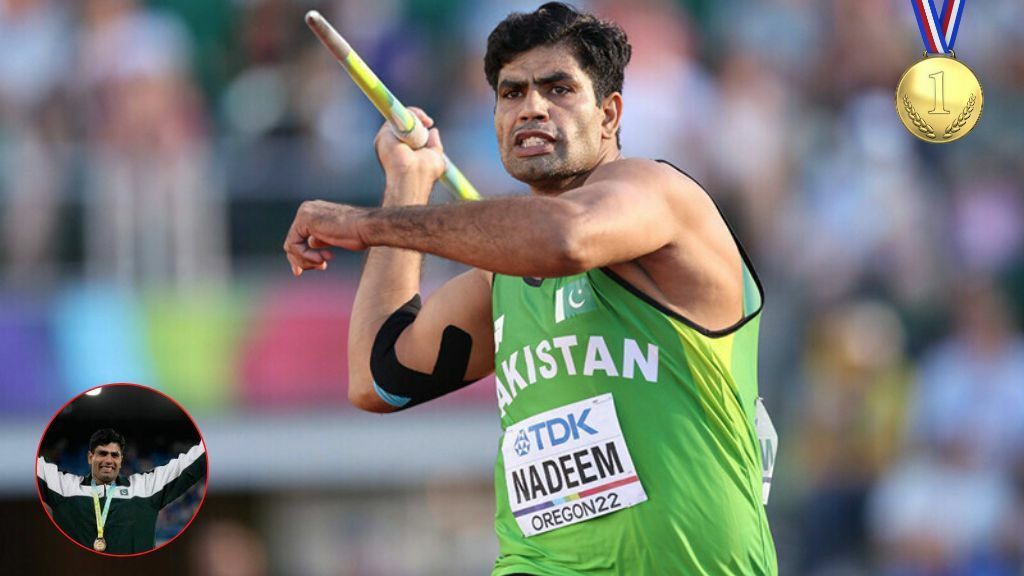 Are we surprised anymore?!

One of the major topics of discussion all across the globe, the Commonwealth Games 2022, are currently happening in Birmingham. And man oh man, are Pakistanis interested in them!  How can they not be?! Pakistan’s athletes have been bagging wins left and right. Pakistanis have managed to conquer almost all of the games; from swimming to weightlifting and finally javelin throw, you name it! This time, Pakistanis have definitely engraved a mark in Commonwealth’s history that is not going away anytime soon.

After a beautiful victory in weightlifting by Nooh Dastagir Butt, Arshad Nadeem has decided that he is no less. Pakistan’s favorite athlete, Arshad Nadeem, scored a RECORD-BREAKING throw at the CW games! Arshad Nadeem threw a whopping 90.18m throw at the games and became the FIRST South Asian to do so. He also broke the CW games record of 88.75m by South African Marius Corbett that stood since 1998. Moreover, he became only the second Asian to cross that mark after Taiwan’s Chao-Tsun Cheng (91.36m). How CRAZY is that?! Record after record!

What a superb performance from Arshad Nadeem!

He earns Pakistan their first track and field Gold after 60 years 🥇🥇, setting precedence with a new Games record.

Arshad Nadeem, you have done it again! Bringing home our first track and field Gold after 60 years!!

Nadeem took to instagram to celebrate his win and share this feeling with everyone waiting at home in Pakistan. He shared a glorious picture of him from the moment he found out that he has surely won!

How AMAZING is this picture alone?! A great capture of emotions!

We cannot imagine how proud his family must be feeling right at this moment. Having a family member grow up to represent your country in a positive light is definitely a different kind of pride. People on twitter have been sharing the picture of Arshad Nadeem’s family watching their son score big on TV. The members are all praying together for their youngin to make the Nation proud. Check out this extremely wholesome image.

This perfectly sums up desi families!

If you thought this is all that is there by Nadeem to impress you then you are wrong. The 25-year old javelin thrower beat all odds during the game. He was able to achieve all of this despite his heavily injured elbow. He had it heavily taped during the game to help give him support. In addition, Nadeem did this without his coach this time. Arshad Nadeem is the only one among his counterparts who is without a sponsor. Can you imagine how he is his own coach and sponsor?! This man is a gem! These limited sponsors are being discussed by twitter users and according to them he needs to have sponsors ASAP.

Arshad Nadeem had no sponsor while other backed by NIKE & PUMA 💔

Look, he achieved everything on his own. #ArshadNadeem pic.twitter.com/2N8ES8wD8T

Get this man whatever he wants! Protect him at all cost!

Everyone in Pakistan is extremely proud of what Mian Channu’s treasure has achieved for Pakistan. Everybody has been celebrating his victory everywhere. And when we say everybody, we mean EVERYBODY! Pakistan’s renowned cricketer and cricket prodigy, Shahid Afridi, took to twitter to express his pride and congratulate his “superhero” on this insane win. Pakistan’s current skipper, Babar Azam, also could not stop himself from congratulating Nadeem on twitter. Moreover, his peers and well known cricketers, Haris Rauf and Shaheen Shah Afridi, also took to twitter to pen down heartwarming congratulatory wishes for Nadeem.

That's what you call a superhero #ArshadNadeem breaking the Asian record for Pakistan at the #CommonwealthGames2022 Congratulations to you and your coach and may you get the recognition and celebration a National Hero deserves inshAllah pic.twitter.com/KVMIyc38xK

Salute to you my brother #ArshadNadeem for bringing another gold for Pakistan in #CommonwealthGames2022.

Well done Champion Arshad Nadeem for breaking his own record and highest in South Asia in javelin throw. You made us all proud by winning the gold 🏅for Pakistan.
Keep rise and shine Fakhr e Pakistan 🇵🇰.
All hail King #ArshadNadeem pic.twitter.com/1Db8PDkftD

So proud of you Arshad Nadeem. You did it for Pakistan. 🇵🇰 🏅 pic.twitter.com/TGc2SATg1m

Athletes supporting athletes?! Name one thing more wholesome than this we will wait!

Pakistan’s former prime minister, Imran Khan, also took to twitter to congratulate Nadeem and admire how he overcame his injury and managed to score what no one could in 60 years.

Congratulations to javelin thrower Arshad Nadeem for overcoming injury & winning the Gold for Pakistan plus setting a new Games record with a throw of 90.18m. pic.twitter.com/QSRyp5tQmd

I think we all know how big of a deal this is!

What an amazing news to wake up to early this morning! Arshad Nadeem has done Pakistan proud by winning the first gold medal in Commonwealth Games. His consistency, passion & hard work hold lessons for our youth. Congratulations Arshad on your brilliant achievement.

This is indeed a lesson for youth, one for the history books!

If this wasn’t enough then DG ISPR took to twitter to congratulate Nadeem for his incredible win. General Qamar Javed Bajwa COAS congratulated Arshad Nadeem and called him nation’s pride and national hero.

Definitely our pride and hero!

Pakistan’s nationals hearts are so full with overpouring love and support for all of our athletes scoring big in CW games. Our athletes have been representing Pakistan so positively all across the globe and we cannot be more proud of them. First Nooh Dastagir Butt bagging gold in weightlifting and now Arshad Nadeem doing the same in Javelin throw, we cannot wait to see what more achievements Pakistanis have to bring home. And this is definitely just the beginning. It is all up from here and we cannot wait to see what these athletes are capable of!

Check out this article on how Nooh Dastagir Butt brought home the first gold medal for Pakistan in Common-Wealth Games 2022!