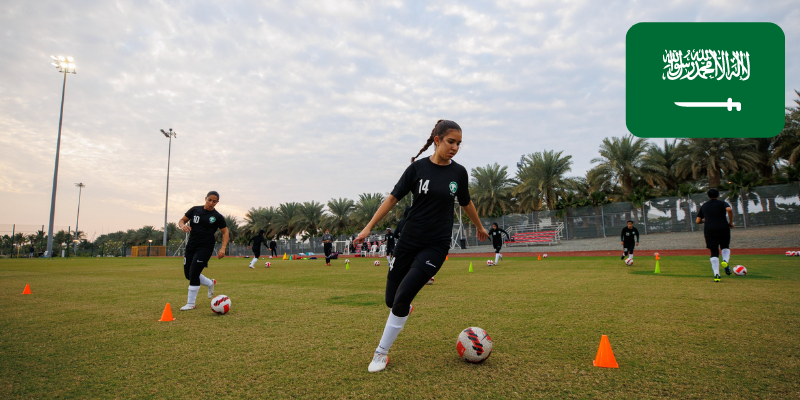 Around 700 players have participated in competing to qualify for the first-ever National women’s team, to play regional and international matches.
The first phase of the training camp started in Jeddah’s King Abdullah Sports City (Al-Jawhara Stadium), just last week. The second phase of the camp will be held in Riyadh from Jan. 27 to Feb. 16.

The camp’s completion will also determine who gets to play in the first international matches, scheduled to be held the Maldives against Seychelles on Feb. 20 and the second against Maldives on Feb. 24

“Today, the dream has been achieved. Today, we saw joy among women, from all who participated in the championship.”

We visited Saudi Arabia to witness the completion of a big milestone for the women’s game.

A total of 16 teams comprising a total of 433 players competed in a total of 72 matches to lead up to the national team qualifications.  The first ever Saudi Women’s National Football Championship was also held in early January, which helped kick-start the incorporation of women in the football leagues. Although women’s competitions were held previously in the Kingdom, this was the first truly national league played on full-size pitches.

“Starting the league had been a goal since we started working alongside government bodies,” said Ibrahim Al Kassim, the Secretary-General of the Saudi Football Federation (SAFF).