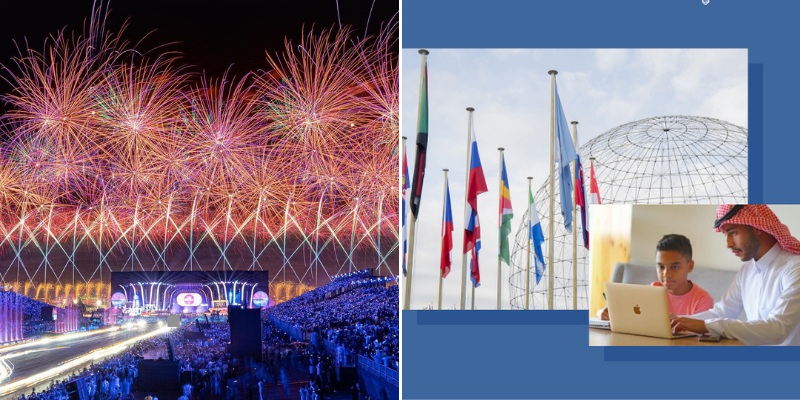 Despite the ongoing pandemic, Saudi Arabia was able to maintain ultimate success in all sectors of the Kingdom.

From concerts, to innovative environmental projects, to even re-openings of tourists spots, these events are some of the many that have lead the nation into big milestones, paving a better way for 2022.

2021 was a landmark year for climate in Saudi Arabia, as the Kingdom scaled up green commitments and unveiled its climate action roadmap. With 2022 around the corner, we look back at key 2021 climate moments in KSA. pic.twitter.com/3RDPwtsojP

This initiative was announced by HRH Crown Prince Mohammad bin Salman as a strategy against climate change.
Cohesive to Vision 2030, the summit was held in April this year, discussing methods to combat global warming.

The summit provided solutions to such a threat with proactive environmental protection through planting 10 billion trees across the Kingdom, reducing carbon emissions by more than 4% globally.
Essential to tackle climate change, the Saudi Green Initiative allowed the GCC countries to successfully scheme a plan of action.

Meet the 5️⃣ finalists of the challenge “Neom: Tourism Experiences for the Future” 🚀

Check out these cutting-edge tourism products that contribute to local tourism growth and support economic recovery.

When it comes to tourism, the Kingdom has rapidly made a name for itself, with opening the office of the World Tourism Organization (UNWTO) in Riyadh this year.

Not only is it the first regional office of the Middle East, but also prompted the launch of the “Tourism Experiences of the Future” in partnership with NEOM.
The NEOM project, as stated by the UNWTO,  will be a source for innovative ideas, business models, and tourism needs of new and exciting experiences.

#OIC welcomed the outputs of the 41st Summit of Cooperation Council for the Arab States of the Gulf (GCC) held in Al-Ula, Kingdom of #SaudiArabia, & the decision of the Kingdom to open its airspace, land & sea borders with the State of #Qatar. Read more: https://t.co/Du4F5qvXsp pic.twitter.com/r8R7BHoNmy

The Kingdom hosted this year’s summit: ‘Sultan Qaboos and Sheikh Sabah Summit’ in the city of AlUla. It was named in memory of the late rulers of Oman and Kuwait.
All 6 members of the states of Bahrain, Kuwait, Qatar, Oman, Saudi Arabia, and the United Arab Emirates discussed GCC progression and policy in this summit.

Strengthening the bond and unity of all 6 nations, this summit also included the restoration of diplomatic relations with Qatar.

Saudi Arabia’s economy saw its fastest growth in the third quarter of 2021 since 2012, according to the General Authority for Statistics. The country’s real GDP grew at an annual rate of 6.8 percent, helped by an increase in global demand for oil. pic.twitter.com/SYPvbmfTpk

Although the pandemic had slowed down global economy, Saudi Arabia maintained its GDP through social reforms and boost in local tourism.

Consumer spending had increased significantly due to re-opening of entertainment and leisure activities, allowing the Kingdom to relapse from post-COVID downfall.

This year brought the return of exciting and new events throughout the Kingdom. Prompting a high vaccination rate, the Kingdom had made it mandatory to have the jabs as grant of access to these events.

Riyadh season, which kicked off just 2 months ago, has recorded over 6 million visitors, also creating more than 100,000 jobs for the community.
The Saudi Arabia Grand Prix was also a major event for the Kingdom this year, along with the MDLBEAST Soundstorm 4-day festival of 200+ artists,  which hosted 700,000 visitors.

#Breaking 🌍 A new @UNESCO report details how #SaudiArabia delivered a remarkable model for e-learning via its #Madrasati platform, which delivers more than 1 million lessons to students daily. @moe_gov_sa pic.twitter.com/eqYZ8pJ3HY

Due to the pandemic, the Kingdom was hit with a challenge to maintain educational consistency. Facing disruptions with in-class attendance, the Kingdom had dedicated 20 TV channels to distant learning. Not only did the Kingdom promote such learning, but also created “Madrasati”, a platform named as on of the leading and most innovative systems of remote education-UNESCO.

Aside from the pandemic, modification of the educational system was also in place, with implementing the Chinese language in the Kingdom’s curriculum.
The Human Capability Development Program was also announced by HRH, Crown Prince Mohammad bin Salman bin Abdulaziz Al Saud as a part of Vision 2030.