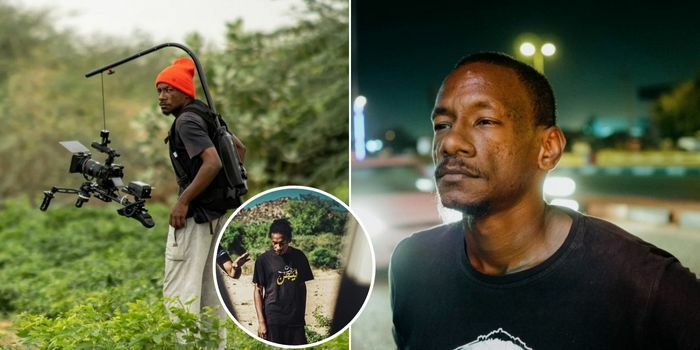 THE MAN BEHIND THE CAMERA!

Ibrahim Ahmad’s story begins in Lebanon, where he resided with his family until he was sixteen years old, then relocated back to Sudan.

After completing high school, Snoopy attended the Sudan University of Science and Technology for Computer Science for two years, until one single moment sparked his brain – and it became the turning point of his career.

Snoopy’s Journey to the Hall of Fame

Snoopy was well known as an energetic spirit with a warm heart, and so his networking skills always helped him reach new heights.

Starting off at the young age of 21 and making ends meet in a new and exciting industry, Snoopy’s first notable moments in film-making didn’t take long after he began pursuing his passions – and even officially working on his own productions.

The closest award to my heart was winning 2nd place at the Sudan Independent Film Festival in February 26, 2020, for Journey to Kenya, my short film. Watching your hard work getting noticed and chosen by people, who also support you, was a high for me. Especially remembering the conditions that we filmed in. It was my favourite because it was never meant to be a film until I met Mohamed Moner, the head of Mogatel Training Center in 2016, I instantly saw myself in him.

Filming on the Road

After speaking with Mohamed Moner, Snoopy was ready with all hands on deck for the journey they would get set to explore.

“In 2019 he told me that he was planning to travel to Kenya to compete in a tournament, and whether I could come and film the entire journey for his blog, or even as a highlight. The thought sparked me to turn it into a short documentary, and people loved it! It was an inspiring, crazy story about a journey to Kenya in a 12-seater minivan, crossing deserts and mountains for over a hundred and fifty hours.”

Journey To Kenya was definitely a defining point for Snoopy as the challenges helped shaped his love for the industry. It was a fully-rounded experience where he was able to be the cameraman, as well as part of the team on their special journey.

The movie was awarded the special jury prize at the 6th edition of Sudan Independent Film Festival in 2020 – alongside his other well-known contributions in films Khartoum Offside, which received best documentary at the African Movie Academy Award, and You Will Die at 20, which was also awarded The Lion of the Future award at the Venice Film Festival in 2020.

Talk About A Phenomenal STREAK!

We were lovin’ our talks with Snoopy, and got to find out a little bit more about what he has coming up. He is currently working on a new masterpiece Jahanmia, which tells the story of six women who were serving prison time in Sudan during the revolution. The exciting film piece is set to portray the real voices of women who had similar experiences. We’ll keep you tuned for when it’s out!

Enjoyed this? Check us out on #LovinKhartoum and read our latest here