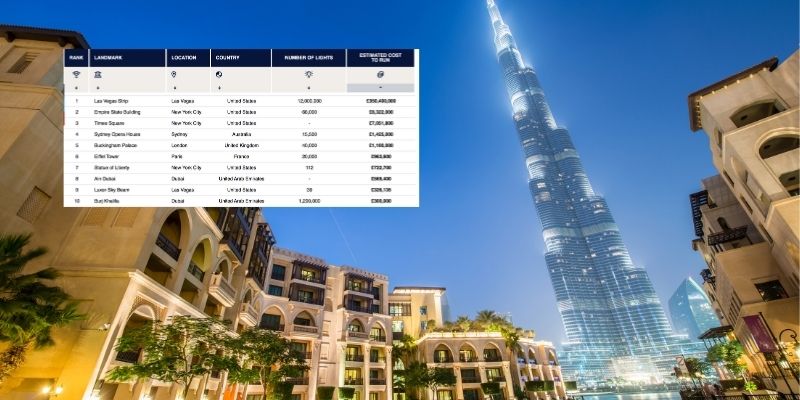 From a list of the top 10 landmarks in the world, the world’s tallest tower is actually the cheapest to light.

Ranking in at number 10 from a list that includes the Las Vegas Strip, the Empire State Building and Times Square, Dubai’s iconic tower is the cheapest landmark to light, costing AED1.5 mill to illuminate its 1.2 million lights.

A list by Smart Lighting shows exactly how much it costs to light each landmark… and it ain’t cheap.

It features 1,200,000 lights in total and saves 3,200 kilowatts of energy daily thanks to the solar panels, keeping costs relatively low in comparison with other landmarks.

The Las Vegas Strip is the most expensive attraction in the world to light and costs a whopping $USD483 MILLION to keep the 12,000,000 lights glowing

Today, HH Sheikh Mohamed bin Zayed Al Nahyan, Crown Prince of Abu Dhabi and Deputy Supreme Commander of the UAE Armed Forces turns 60 and this is a brief snapshot of the momentous year gone by.

From taking Arabs to Mars and fighting the COVID pandemic to remaining the stable backbone and navigator of this great country through positive relations here and abroad.