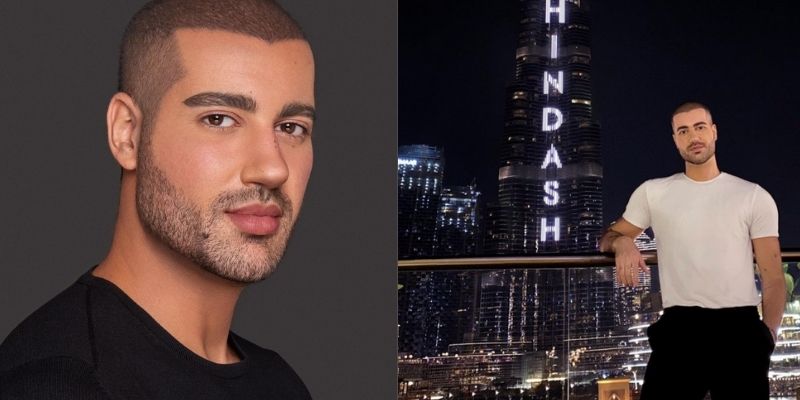 The Jordanian painter-turned-makeup artist Hindash announced the launch of his product line’s website in standard Dubai fashion, by of course having it on the world’s tallest tower.

The Burj Khalifa has lit up on several occasions for a variety of things but beauty gurus making it on there truly hits different.

Announcements in Dubai are on a whole other level

Extra, extra- read all about it is basically the MO here and Hindash’s marketing level just set off.

Shortly after the announcement launch took place on Friday night, Hindash thanked his community of supporters for enabling him to succeed.

“Launching Hindash Cosmetics as the first Middle Eastern, Dubai-born cosmetics brand on THE Burj Khalifa is the cherry on top! I can’t wait to continue sharing the rest of my journey with you.’

Last month, the artist shared the first product out of the brand: Beautopsy

The palette consists of different hues for multi-use (see what we did there?) such as: eyeshadow, blush, contour, highlight, eyeliner and brow powders.

Pretty neat. The best part is the palettes are also 100% vegan.

His worldwide popularity keeps soaring, with over 68 million views and 1.7 milllion subscribers on YouTube

If you’ve not kept up with Hindash yet, you should defo start now.

Listen to The Lovin Daily: Viral IG Star Elsa Majimbo Has Arrived And Is Living It Up With Dubai’s Fashionistas

Get your selfies ready with this handy-dandy attachable phone ringlight (with a 3-level brightness increase!)