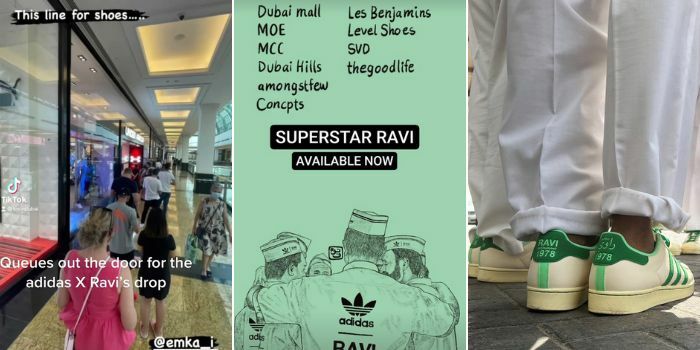 Ravi Restaurant is “the finest Pakistani restaurant in the UAE serving traditional cuisine since 1978,” so you might say that old-time residents of the country feel nostalgic when they hear the name.

About a week ago, residents had their jaws on the floor when they saw that Ravi is collabing with adidas on their Superstar shoes! They’re white and green and say Ravi on the back – JUST GORG!

And since everybody wanted to get their hands on the limited-edition bad boys, on the day of the release, everyone was outside the stores waiting to get their pair

Some bought theirs online and sure it beats the standing in line BUT the feeling of walking out with something you’ve been waiting for, is just unmatched. The sneakers were sold for AED549 and the option to customise them was available.

The launch at the Dubai Mall flagship adidas store just went all out with Ravi restaurant decor with a faux kitchen, chai cups, a tuk-tuk vehicle and so much more. There were T-shirts for sale that had the cutest Ravi menu and price list, the same as the one on the tongue of the shoe.