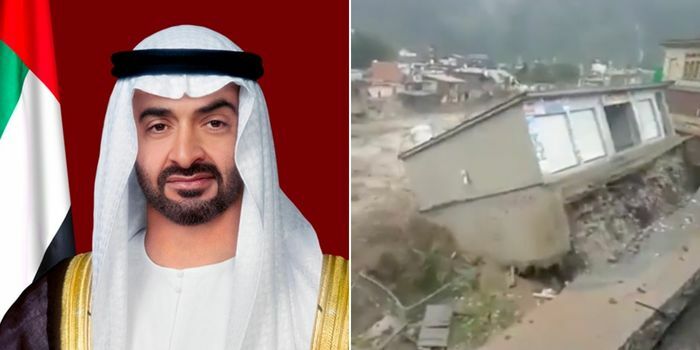 UAE President His Highness Sheikh Mohamed bin Zayed Al Nahyan has ordered the provision of urgent relief aid to the Islamic Republic of Pakistan, which is witnessing torrential rains and floods that have resulted in deaths, injuries and displacements.

The President also made a phone call to Pakistani Prime Minister Shehbaz Sharif, offering condolences and sympathy to the victims of floods and torrential rains and wishing a speedy recovery for the injured and the quick return of the displaced to their areas.

The UAE will provide humanitarian relief services to the displaced to help overcome the challenges they are facing.

The relief aid will include tonnes of food, medical and pharmaceutical supplies, along with tents and shelter materials

Relief teams will also provide all kinds of humanitarian support to Pakistani cadres and institutions, and help secure the safety of the affected and their food, medical and logistical needs.

‼️ Millions of people have been affected by #PakistanFloods, the government has declared a national #Emergency.
According to the National #Disaster Management Authority, unfortunately, more than 900 people had been killed since June.#Pakistanflood #flooding #flood #GlobalCrisis pic.twitter.com/OVswnCPiAY

According to most recent reports, the flash floods triggered by monsoon rains have caused a death toll of 1000 civilians.

The calamity is one of the worst disasters of the decade and has affected over 33 million people.