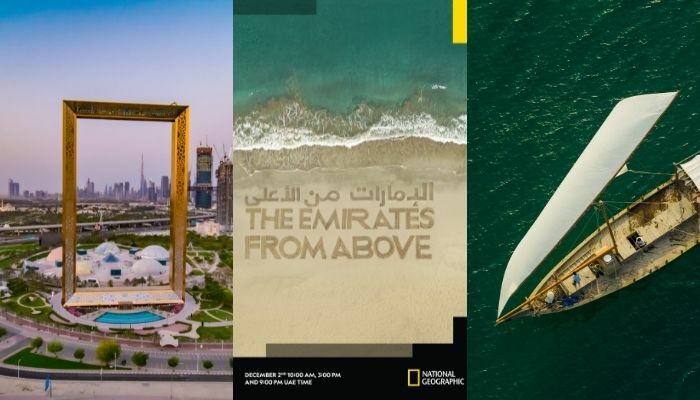 WATCH: The UAE From A New Perspective In National Geographic’s Latest Documentary

What do you think of when you think of the Emirates? There are the obvious (and impressive) skyline shots that first come to mind. The diverse group of people from all corners of the world that call the nation home. The mix of modern architecture and rich heritage, new and old traditions. Sand dunes, skyscrapers, and sunshine, oh my!

But what really makes the UAE, the UAE? Or is it, in fact, that unique combination of all these elements that make people move here for a year, and stay for a decade? And for the biggest question: how on earth do you capture that in a film?

The Emirates from Above is a 44-minute global documentary that perfectly captures the nation as never seen before – all from above!

Featuring many of the Emirates’ iconic landmarks, the documentary also tells the ‘untold’ stories of hidden gems across the UAE

Joining National Geographic’s well respected (and loved) global ‘From Above’ series, The Emirates from Above is the first GCC nation to be featured! The anticipated special will also air in 33 languages, in 120 countries on National Geographic.

Friends in the UAE – if you’re around this National Day weekend, don’t miss the world premiere of the documentary at Expo 2020 Dubai’s Al Forsan Park! Presented by the USA Pavilion, the special screening event kicks-off at 7pm on December 1 and is open to all Expo ticket holders.

BONUS: You might recognize the English narrator as the voice of Scar in Disney’s The Lion King! National Geographic Abu Dhabi viewers will recognize Emirati actor, producer, and TV presenter Saoud Al Kaabi as the Arabic narrator