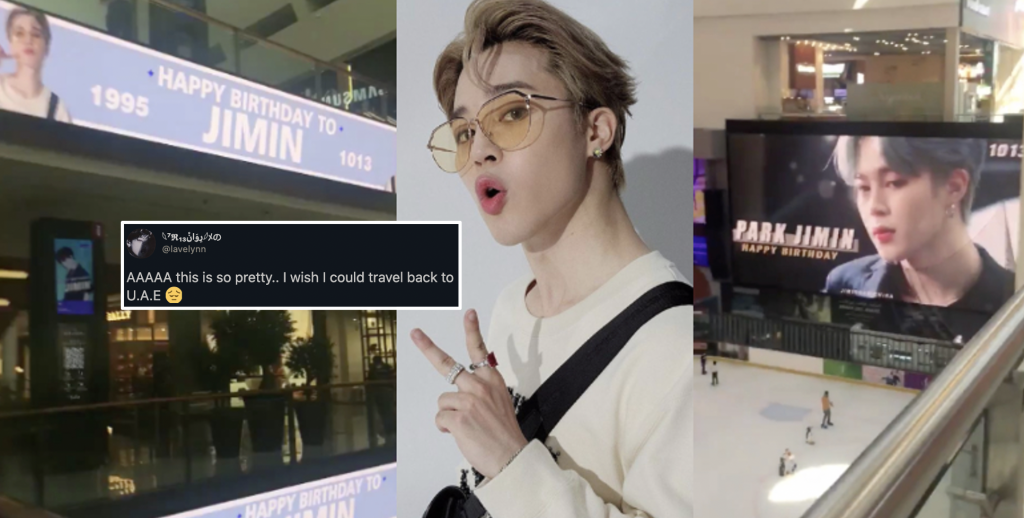 BTS Army, you crazy kids are in for quite a surprise this entire weeeeeek!

The South Korean dreamboat is a singer, songwriter, and dancer for the all-boy-band BTS and made his debut with the band back in 2013

The BTS army were quick to spot the Jimin billboard above the Dubai Mall ice rink and quickly took to social media to share the new week-long attraction!

Not like you didn’t already know but still, a lil clarity never hurt no one!

If you guys wanna check out the birthday ad takeover, it’s everywhere there is an ad screen in Dubai Mall from October 09-15! 💜😊 @BTS_twt pic.twitter.com/uKOjzuryw1

Fans are hoping that the Dubai Fountain plays out the BTS singer’s Dynamite as well… now wouldn’t that just be the cherry on top?!😌🍒

Omg I really want this to happen

Near the ice rink, at Fashion Avenue, near the Dubai Metro link – just some of the places you can spot the giant Jimin billboards around the mall throughout the week!

It’s hard to post all locations when there is 200+ ad screens in Dubai Mall where you can possibly see it. 😂
I can tell you the hot spots for the best ones is the screens near ice rink, near the Fashion Avenue, and in the Metro Link which have many and big ones. 😊👍🏻

Former Dubai peeps are really missing the city and its many exciting attractions are hoping to return ASAPPPP!!!

AAAAA this is so pretty.. I wish I could travel back to U.A.E 😔 https://t.co/1qU9JceSTe