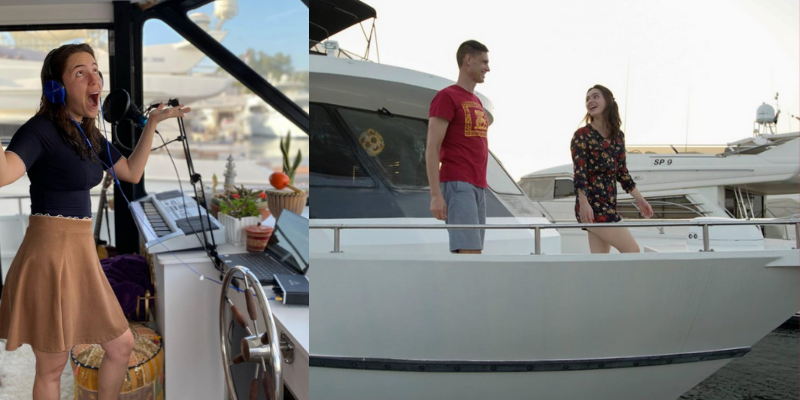 A Dubai couple has been living on a boat, a literal boat (YES!), for two years now and this might make you rethink your entire living sitch.

Mark Moore and Rosella Age decided to make the move to live on a houseboat, namely a 1990 Skipperliner, and have lived there for over two years now.

The couple moved from the US to Dubai in 2018, initially living in a Dubai Marina apartment (as you do)

According to a video by lifestyle blogger Curly Tales UAE (who featured the two love birds), the two had moved to Dubai and lived in a one-bedroom apartment in Dubai Marina, after which they decided to buy out a 1990 Skipperliner houseboat- now renamed ‘Rena.’

Rena houses five-bedrooms, a kitchen, four fully-functioning air conditioners and a patio space to grill food- PLUS, how could we forget? They can actually sail around the city in the boat.

Sounds like the dream, right? Such was the case for the couple who mentioned (in an IG post) that the inspiration came from a Netflix show called ‘How To Live Mortgage Free” and go off on a whim.

Rose, the owner of the boat, calls living on a houseboat a “lifestyle that came remarkably easily and was a gift from God.”

Super fitting from the looks of it!

One of the few cons? Having to maintain it during the summertime

Since purchasing a boat like theirs averages around AED57,000 including water, electricity and a one-time joining fee at the Dubai Creek Golf & Yacht Club.

The two have opened up Rena to anyone interested in renting it out for filming, shoots or whatever unique event you have in mind

What do you think about this living situation? Like it or LOVE it? Sound off in the comments section below.

Listen to The Lovin Daily: Dubai Police Fines A Tour Operator For Violating Restrictions With A Desert Gathering