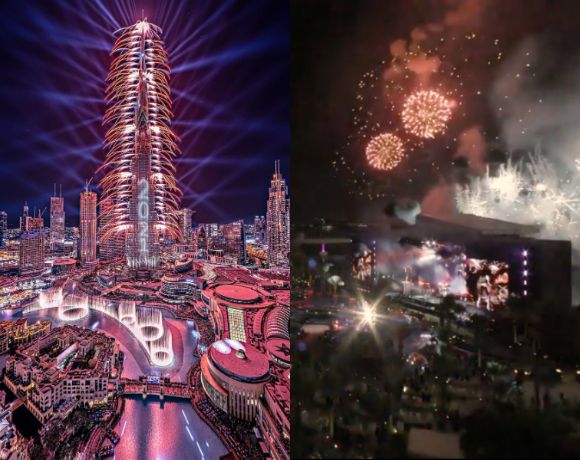 If you haven’t heard or seen a single photo from last night’s celebrations of the New Year, chances are you’ve avoided social media. Just when you thought the pandemic was going to pull at the city’s strings and bring about a different New Year’s Eve celebrations, well, it did but the rest of the world celebrated 2021 along with live streams of the fireworks and events that took place.

In essence, you could say those who couldn’t be here lived vicariously through the ‘gram posts.

From the next-level safety precautions taken, iconic Burj Khalifa fireworks that could be seen from Hatta- Dubai bid adieu to 2020 in style

But before we get to that, the team at Lovin Dubai want to wish you all a Happy New Year.

They just go hand in hand.

And this year was absolutely no exception. If you lived in Business Bay or Downtown, chances are you heard thousands of people shout ‘Happy New Year’, from the top of their lungs in unison. The laser and light show, accompanied by the ever-majestic fireworks was something out of an epic movie.

Safety and precautionary takes were most def assured

Even Dubai’s Roads and Transport Authority (RTA) opened up extra parking spots for residents who wanted to commute to watch the NYE fireworks. An extra 16,700 parking spaces near the Burj Khalifa where freed for peeps!

Not to mention the record-breaking amount of ambulances, paramedics, ambulance stations and exit points spread out at event areas across the city. Everything was basically thought out.

The keeness on organisation was superb at most restaurants families dined at or venues visited.

We appreciate the efforts of our volunteers who make #MyDubaiNewYear's celebrations such great event every year. pic.twitter.com/OMcNMOI6eE

Burj Khalifa’s super EXTRA display of fireworks was even visible ALL the way from Hatta!

That’s a 45-minute drive, 120kms away, surrounded by mountains- imagine that.

Ahmed All Bedadwi caught a glimpse of all the action in the images below!

The legends in Dubai on New Year’s Eve, even we’re in tears.

While some people stayed home (and tuned into Lovin Dubai’s NYE Live! show)

2020 has been a peculiar one for us all but the resilience of the city and the UAE as a whole proves once more that nothing can stop us from staying hopeful.

Naturally, other residents opted to avoid the crowds and celebrate in the comfort of their own home- while watching the streams of fireworks (to get in the mood) or view it from out their balconies.

Lovin hosted a 4-hour live-stream leading up to the countdown, showcasing both Burj Khalifa’s fireworks and the view of the Atlantis’ fireworks at The Pointe

You can catch up on how the whole thing went here.

thank you guys for the show, we're watching from the safety of our couch, kids asleep, all eyes on you! thanks!

Some peeps opted for a movie under the fireworks

While others camped out at pristine locations, like The Pointe, to catch all the action

Overall, it was a bittersweet goodbye to 2020