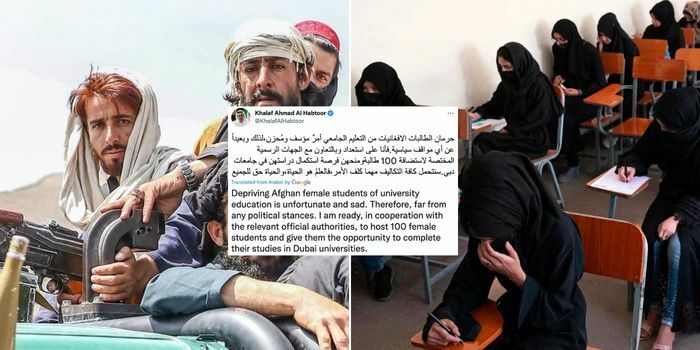 Earlier this week, Ambassador Lana Nusseibeh, Assistant Minister for Political Affairs and Permanent Representative to the United Nations, reiterated the UAE’s strong condemnation of the most recent decision by the Taliban to ban Afghan women and girls from accessing higher education.

Khalaf Ahmad Al Habtoor, founding chairman of the reputed Al Habtoor Group has tweeted in support of Afghan women by stating that he would host 100 female students and give them the opportunity to complete their studies in Dubai universities

The announcement to ban women from accessing higher education was made by the Taliban on Tuesday, December 22

The letter by the Taliban’s higher education minister states that all universities will remain closed for women until further notice.

BREAKING: The Taliban have banned women from universities.

This is a shameful decision that violates the right to education for women and girls in Afghanistan. The Taliban are making it clear every day that they don’t respect the fundamental rights of Afghans, especially women. pic.twitter.com/Ydf13rvsbF

The Taliban’s decision is the latest example of restrictions imposed on Afghan women and girls since August 2021, aimed at their erasure from public life

The UAE reaffirms that this decision, as well as the earlier bans on girls from accessing secondary education, violate fundamental human rights, contravene the teachings of Islam, and must be swiftly reversed.

The UAE will remain steadfast in its long-standing support for and commitment to Afghanistan’s sovereignty, stability, security, and prosperity, in cooperation with regional and international partners.

Currently, protests are ongoing in Afghanistan to overturn this decision

The decision will drastically impair the global feminist movement and will severely damage Afghanistan’s progress in the long run.

Nationwide protests are happening in #Afghanistan.

These BRAVE female protesters demonstrated in #Takhar province’s Taluqan city despite the threats of the Taliban using violence against these students.