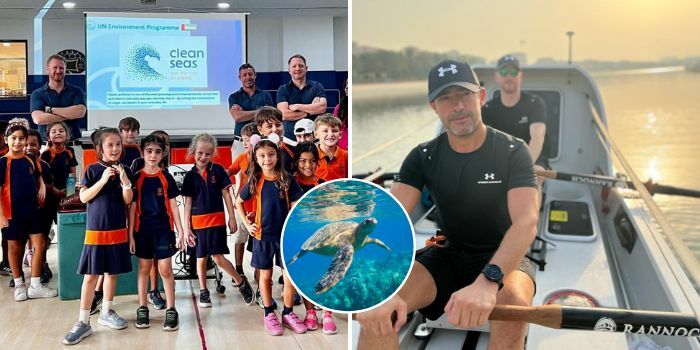 Armed with desalinated water for hydration, solar energy to power batteries and electronics, and freeze-dried food, three members of the Arabian Ocean Rowing Team will row their boat 5000 kilometres across the Atlantic ocean starting 12th December.

For a visual image, this means that their boat will be shorter than two cars combined!

The team of three- James Raley, Rai Tamagnini and Toby Gregory will sail through waves of up to 40ft, while also facing extended sleep deprivation.

Beginning from La Gomera, which is off the coast of Africa, and ending at the English Harbour in Antigua, the ocean rowers will be first team from the UAE to row unsupported across the Atlantic.

It is evident that this journey will severely test the crew’s physical and mental limits. It is a gutsy adventure. One that requires a lot of grit, inspiration, courage and… well, extensive working out.

It’s all for a good cause

The Arabian Ocean Rowing Team has partnered with the United Nations Environment Program’s (UNEP) Clean Seas campaign, which works with organisations around the world to reduce marine littering and its negative impacts.

They will also carry science experiments designed by students they met from their #BePartOfIt campaign. This is to help students better understand how plastic pollution has impacted the ocean.

#BePartOfIt was intended to spread awareness among schools, businesses, and other organisations to raise awareness around ocean health, and highlight the issues caused by plastic pollution.

Inspiring the community, one row at a time

Through this event, the Arabian Ocean Rowing Team is spreading a message- the ocean’s resistance and resilience is not infinite, it cannot continue absorbing the effects of unsustainable human activities.

Here’s wishing them the best of luck for their noble cause!