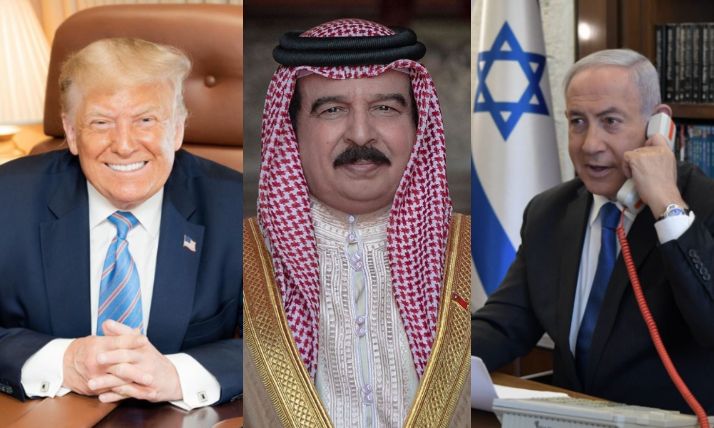 Bahrain will now be the fourth Arab country in the MENA region (after the UAE, Egypt and Jordan) to recognize and establish relations with Israel since its founding in 1948.

As announced by the US President Donald Trump, Israel and the Kingdom of Bahrain have reached a landmark to establish full diplomatic relations and normalize their ties. Making it the “second Arab country to make peace with Israel in 30 days.”

There was much talk after the UAE announced it’s peace deal with Israel, that Bahrain would be the next Arab country to recognise Israel.

In their joint statement, Trump, Netanya and King Hamad called the agreement “a historic breakthrough to further peace in the Middle East.”

This is a new era of peace. Peace for peace. Economy for the economy. We have invested in peace for many years and now peace will invest in us

– An official statement given by Israel’s Prime Minister Benjamin Netanyahu on the Israel-Bahrain peace treaty.

BREAKING: President @realDonaldTrump has brokered a deal to establish full diplomatic relations between Bahrain and Israel!

"There had been two peace agreements with Israel in the last 72 years.

This is now the second peace agreement that we've announced in the last month." pic.twitter.com/TmJTNFiyK4

The UAE-Israel peace treaty was brokered less than 30 days ago, in August 2020. The ceremony will be held at the White House to celebrate the establishment of full relations between Israel and the UAE.

"On this occasion, I want to thank the leaders of Israel and Bahrain for their vision and courage to forge this historic agreement." pic.twitter.com/uvEBZJIcxt

As more and more countries normalize relations with Israel, the region becomes more stable, secure, and prosperous—and we can keep returning more of our great American troops home.

POTUS added the above and concluded saying that the US will continue to stand with the people of the MENA region and continue to build a brighter, more hopeful future.

The signing of the Abraham Accords will take place at the White House on Tuesday. pic.twitter.com/tURdq2cNzi